Sixers NBA Draft Grades: Not everyone is on board with the Zhaire Smith-Mikal Bridges trade 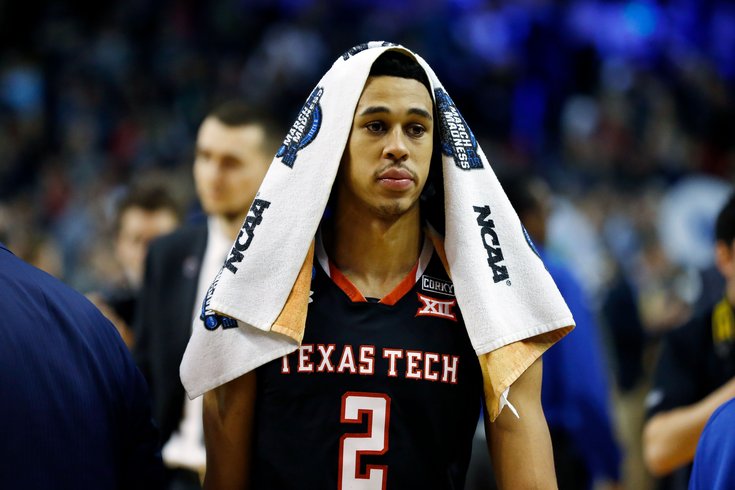 Unlike every other professional sports draft, the NBA really knows what it's doing: Two rounds. 60 total picks. One night.

Hell, baseball's draft has nearly as many rounds as basketball has picks. The MLB draft is long, extremely boring, and you hardly know any of the guys — so maybe it's a perfect representation of the sport — but when it comes to the NBA, the draft is short, sweet and contains a ton of action involving players you've actually heard of before — another draft that represents its sport well.

A draft that lasts a couple of hours — as opposed to a couple of days — leaves a lot more time for the more important stuff, like the reacting to the picks. With that in mind, here's a look at how the national media are grading the Sixers' 2018 draft picks, specifically the decision to trade 10th-overall pick Mikal Bridges to Phoenix for Zhaire Smith and a 2021 unprotected first-round pick.

And if you thought the lukewarm reaction to the trade was due to hometown bias of losing out on Villanova's Bridges, you might want to think again. Looking around the country, there's hardly a consensus on whether or not this was the right move for the Sixers.

ESPN's Jonathan Givony didn't offer a grade, but had the following to say about the Sixers' decision to draft Smith:

The Sixers made what appeared to be the most predictable pick in the draft when they selected Bridges at No. 10. Surprisingly, they ended up trading Bridges to Phoenix upon being offered the rights to Smith (selected at No. 16) and the Miami Heat's 2021 first-rounder. This was seemingly a steep price for a Suns front office in win-now mode, but this group is unlikely to still be around in 2021 should they not start competing soon.

The Sixers not only add a superb asset to their treasure trove of picks, but they also get one of the most intriguing young prospects in the draft in the freakishly athletic Smith. He is likely to develop into one of the best defenders in this class, and he has shown enough improvement with his 3-point shooting to give him 3-and-D potential next to Joel Embiid and Ben Simmons in time.

This is not the type of move you'd expect with head coach Brett Brown leading Philly's front office, but it should certainly inspire confidence from Sixers fans that the franchise is thinking long term while continuing to angle for a championship.  [espn.com]

I wanted Bridges all along — I'm not a Villanova fan so it has little to do with hometown bias — but I had Smith in my top three so I'm not really going to complain. And I think the fact that Brett was able to pull the trigger on such a move, knowing how it would be received, shows he may be more cut out for the front office than I originally thought.

Brett Brown surprised all of the cynics (like myself) who figured he would take an instant-impact upperclassman like Mikal Bridges. Instead, he traded down to get a high-upside flier in Smith, and the Sixers got an unprotected first-round pick in 2021 for their trouble. It’s not clear exactly how Smith fits next to Joel Embiid and Ben Simmons, but he’s a smart player who may already be the best athlete in the NBA. His defensive ability will get him playing time right away on a contender, and he has more offensive upside than people realize.

Two perfect scores in a row? Maybe, even with as much as it hurt the local fanbase, trading Bridges away was actually the right move for the Sixers.

Philadelphia trades the rights to Mikal Bridges to Phoenix for Miami’s 2021 first rounder and the rights to Zhaire Smith. For as much as Philadelphia would have embraced a hometown product like Bridges, this is a great trade for the Sixers.

Smith is the best athlete in the draft, an explosive 6’4 guard who plays like a big man. He rebounds better than Jaren Jackson and blocks more shots than Marvin Bagley, making him one of the most unique prospects in this class. There is no better pure athlete in this class than Smith.

If his shooting eventually comes around, watch out. Until then, he’ll thrive running in transition with Ben Simmons and will be able to make plays above the rim on both ends of the court.  [sbnation.com]

Hey, not everyone can get straight A's...

This pick is going to the Sixers with Miami’s 2021 first-rounder for Mikal Bridges, so Smith is headed to Philly. We’ll grade this decision for the Sixers, which is a little bit baffling given how strong a fit Bridges was, but does build in more long-term upside for Philadelphia and adds a future first. For the Sixers, who can afford to bring Smith along slowly, it’s an admirably bold move, and while Smith folds in a lot of risk, he will benefit from being able to play off of the established stars already there. It’s a good pickup for the Suns, who sorely needed a defensive-minded wing player to add to their core, and have assembled an appealing collection of young talent. Grade: B  [si.com]

While Jeremy Woo graded the pick itself, Jake Fischer took a look at the value the Sixers got in their trade with Phoenix — and, as our own Kyle Neubeck was quick to point out, it's all about Kawhi (or another marquee player).

... Acquiring the Heat’s 2021 selection in addition to a wing prospect the team clearly coveted is a massive haul here as well. A Suns source told The Front Office that the selection is completely unprotected, which could serve as a massive lubricant for any of Philly’s efforts to acquire Kawhi Leonard. The Sixers were obviously down a first-round pick in its warchest after dealing the Kings’ top-1 protected 2019 first-round pick to Boston in last June’s efforts to acquire Markelle Fultz. Adding an unprotected selection—which could emerge massively valuable should Miami deteriorate as previously mentioned—could be incredibly helpful in Philly’s efforts to acquire Kawhi Leonard from San Antonio this summer. If that benefit is the cost of doing business for moving off Bridges for Smith, it’s an incredible haul for Philadelphia. This grade should really be a TBD, dependent on any impending Leonard negotiations, of course. Should the Sixers one day soon pull off that blockbuster, Philly’s present non-GM front office might be up for a collective Executive of the Year award.  [si.com]

Executive of the Year Brett Brown.

Now, back to the Smith pick itself...

Smith is an explosive player, and he will be on his way to the Philadelphia 76ers, while Mikal Bridges will play for the Suns.

Smith is a world-class athlete with a long wingspan and tremendous leaping ability. He can pick up his opposite number full court and harass him all the way down the court. He has a mid-range jump shot.

The 19-year-old is known for his hard work because he was not a top-100 recruit. However, he improved by leaps and bounds and should give the Sixers an outstanding defensive stopper.

The Sixers had a perfect pick at No. 10 with Mikal Bridges, an NBA-ready 3-and-D player. Then they traded down to get one of the most raw players. Will Smith be a contributor any time soon, the way Bridges could have been? He's got the potential to be an excellent player because of his absurd athleticism. But the Sixers should be thinking about next year, not 2021 (which is when they get the Suns' pick). Grade: C+  [cbssports.com]

The Sixers took Villanova’s Mikal Bridges (10), bringing him home and making his mom, who works for the Sixers, ecstatic. Then pulled the rug out from under that family and sent him to Phoenix. They ended up with SG Zhaire Smith (16), PG Landry Shamet (26) and SG Shake Milton (54) and a future unprotected first-round pick. But the way they juked Bridges is a bummer in my mind, not too mention the fact I think he would have been a great add to ‘The Process.’ Zhaire Smith had better live up to the hype. And that 2021 1st-round pick needs to be a good one.