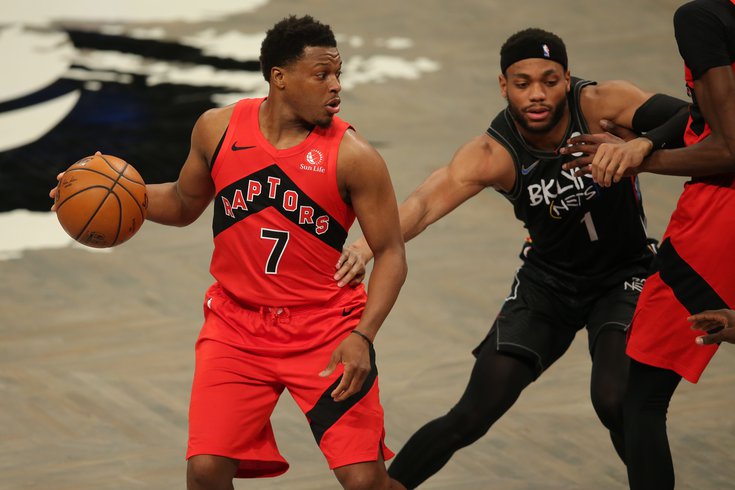 With the Sixers' pursuit of Kyle Lowry coming down to the wire, offers and counteroffers are flying around the marketplace. And one report suggests the Raptors are asking for the moon from Philly to get it done.

During a Thursday morning appearance on First Take, ESPN reporter Brian Windhorst talked through his understanding of the deals the Raptors are seeking right now. The bar is reportedly a high one to clear no matter who wants Lowry, and the Sixers are no exception:

From Philadelphia, they are permitted to trade '21 and '23 first-round picks, this year's pick in 2023. plus they have Tyrese Maxey, their young guard out of Kentucky, plus they have Matisse Thybulle. Toronto would like all of those pieces, and from what I am being told, Philly has not been willing to put that whole package in there.

The Miami Heat, who Windhorst (and most of the rest of the basketball world) suggests are the other top competitor for Lowry, are being asked to deliver a similarly pricey package. Windhorst reports that sharpshooter Duncan Robinson has already been made available in trade offers to Toronto, but the Raptors remain in pursuit of Kentucky product Tyler Herro on top of that, with Miami refusing to budge there.

To state the obvious here, the Sixers are not making that sort of deal for Lowry, even though they feel he can have a material impact on their title window. While it's unclear at this moment which young player and draft pick(s) have actually been put on the table, Philadelphia is not prepared to deal most (and arguably all) of its future assets in one move at the deadline, short of securing the services of an in-their-prime star.

It's the reason team sources downplayed their approach at the deadline for weeks, noting that inflated prices and reluctance from the rest of the market would likely lead to a quieter deadline. Things have changed a bit since then — the Raptors are much more open for business than they were a few weeks ago. And it's fair to note this is a classic negotiating tactic, asking for even more than you can expect to get while knowing you'll have to settle for less than that.

Not that this is breaking news, but Philadelphia's interest in Lowry is significant, with team brass viewing Lowry as a player who fits splendidly with their core and increases their shot to win it all. He's an excellent facilitator who can excel on the ball but doesn't need to dominate possession, a hard-nosed defender whose acting chops help draw foul calls, and a fearless, if a sometimes inconsistent shooter who can help you space the floor. I don't know if there's any one skill of Lowry's that is singularly great, but he's good at so many different things that he can overcome bad nights in one area by making up for it in another.

Toronto asking for a big haul, mind you, partially rests on the belief that a future commitment for Lowry will be locked up as part of any trade he would be a part of. Within that context, a big ask makes sense — you're potentially paying for a three-year commitment from Lowry, rather than a rental for this season and this season only.

But this sort of package would leave the Sixers almost unreasonably thin, in need of aggressive moving and shaking on the buyout market to fill in the blanks. Financially, the above package would still require significant salary matching on Philly's end, thanks to the low salaries of both Thybulle and Maxey. Danny Green and bench forward Mike Scott would likely need to be moved, if not to Toronto then to a third team who could help facilitate the deal.

There's still a lot of time to haggle between now and 3 p.m., and this roller coaster ride is far from over. Strap in.