All of this is in addition to Philly's ongoing pursuit of Raptors guard Kyle Lowry... 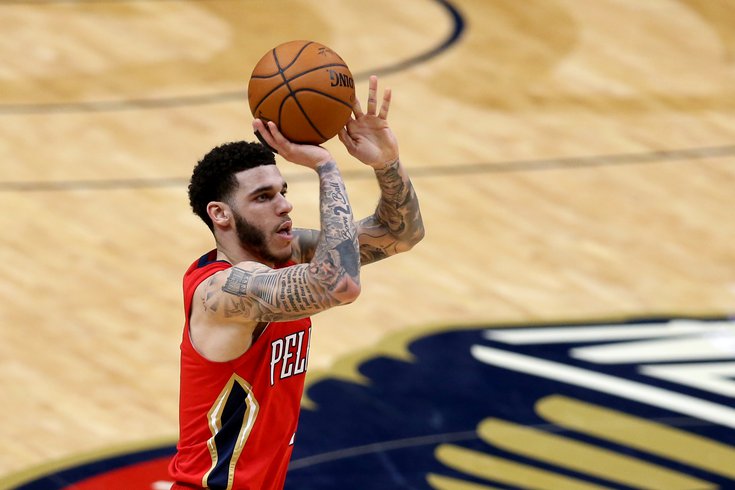 The Sixers are still in the running for Kyle Lowry with less than 48 hours until the 2021 NBA trade deadline, but the latest rumors have them after a wider spectrum of guard upgrades, including Pelicans guard Lonzo Ball, who is in the midst of a breakout season.

That's the latest word from ESPN's Adrian Wojnarowski, who offered this pair of tweets before Philadelphia's game against the Warriors on Tuesday evening.

Beyond Lowry, Sixers have shown interest in other guards available in the marketplace -- including Powell, Lonzo Ball and George Hill, sources said.

To some degree, the news about Lowry is the bigger development — he's the only guy in this group who offers a significant boost to their current title chances, with their odds currently standing at +1200, according Pa.Unibet.com. Beyond that, his availability is news in its own right. Within the last few weeks, Lowry was all but off the table according to public and private chatter from Toronto, but now he appears to be inching his way out the door before the deadline strikes.

But all three of the other players listed here are interesting for different reasons, so let's entertain the possibilities one-by-one.

Ball is the guy you likely all know, and he has undergone some serious changes since you knew him as a national spectacle (along with his father) playing for the Lakers. His jumper, which was a major issue upon arriving to the NBA, has taken a huge turn over the last two seasons, and his success from deep (38.5 percent on 7.8 attempts per game this season) has been the spark behind a breakout year for Ball in New Orleans.

Now that you can believe in his jumper, he's a fascinating fit alongside Ben Simmons specifically. Ball is not the sort of player who is going to collapses defenses and create open threes from pressure at the rim, but he has the vision and guile to exploit small passing windows from all angles. Putting him on the floor with Simmons would create some dazzling highlight reels, especially in transition, where Ball's outlet passing could buy the Sixers a few more buckets per game against retreating defenses.

His real value to Philly may come on the defensive area of the floor, where he could credibly defend most guards opponents could throw at them, switch across matchups, and disrupt teams away from the ball as well. With Ball up top, Simmons on the best wing, and Embiid anchoring the defense, the Sixers could leap from very good to potentially special on defense.

The caveat: Ball is a restricted free agent this summer, which eats into some of the value it would take to acquire him but makes him a risk to get pricey after this season. If the Sixers trade for him, perhaps they're just happy to pay whatever he commands in the offseason, but that would test ownership's financial commitment to this team, especially if a Ball trade doesn't lift them to soaring heights come playoff time.

Norman Powell is the other Raptors target at this year's deadline, and similar to Ball, he's in the midst of a career year. Averaging nearly 20 points per game on an admittedly disappointing Raptors team, Powell is one of the first guys they've been tied to that provides a true wing skill set. He's putting up elite shooting numbers (43.4 percent on 6.5 attempts per game), has a bit of self-creation juice on top of off-ball/cutting ability, and he has the size and athleticism to beef the Sixers up on the wing, something they could end up needing in the playoffs.

On top of that, he's cheap. Powell makes just under $11 million this season, which makes him relatively easy to acquire if you want to make a pick-heavy deal without upsetting the rotation too much. Financially, a pairing as inconsequential as Mike Scott and Terrance Ferguson is enough to match salaries, assuming the Sixers wanted to pony up the picks to make that deal work.

But Powell is likely to get a lot more expensive this summer — he has a player option for $11.6 million next season that he will almost certainly decline in order to hit the open market and cash in. And that makes dealing for him a tricky proposition. Do you want to give up premium picks for a guy who could leave with no recourse in the summer? A better question — do you want to be the team paying a premium for Powell's career year? He should retain some value regardless, but as Sixers fans know good and well, everyone's value is judged against their earnings.

George Hill is a guy we've discussed some around these parts already, and Hill is as clean a fit on paper as you're going to find because he's the sort of guy who all playoff teams want. Solid defender, solid initiator, terrific catch-and-shoot player, there's basically nothing to dislike about him.

Even better news: he also has another year on his deal that is only partially guaranteed, so if he stinks it up and you don't want to be on the hook for the full $10 million and change next year, you have an out.

That is the thinking for plenty of other suitors, however, and the Thunder will sit in a position of strength right up until the deadline. Hill's age should cap the price at a point lower than the other two guys mentioned, and I think he's probably the most realistic candidate as a result.

Expect a few more twists and turns before Thursday's deadline, and we'll keep you locked in on the latest ones as they come in.