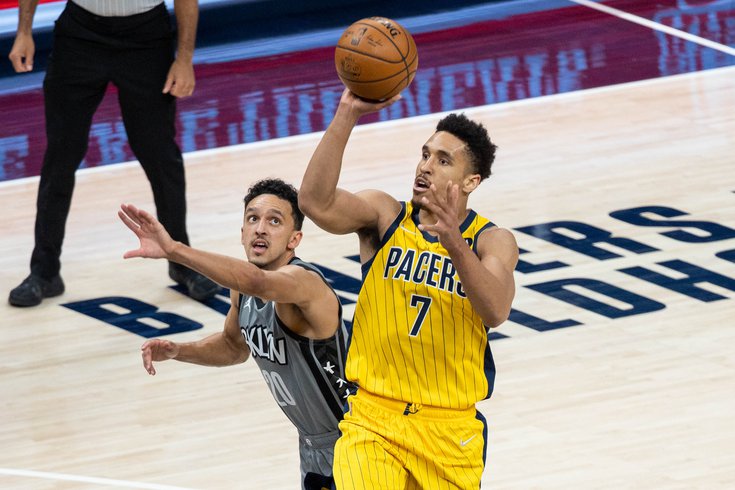 Kyle Lowry has been the major name floated among guards at the 2021 trade deadline, with the Sixers still interested in a homecoming for the Raptors guard. But what if there was another option on the table — a younger, productive guard on a reasonable contract who would fit in their lineup with ease?

The player in question is Malcolm Brogdon, Indiana's starting point guard who many moons ago beat out a pair of Sixers for the 2016-17 Rookie of the Year trophy. Vincent Goodwill of Yahoo! Sports reports on Tuesday that some around the league believe Brogdon is available, at least if the Pacers are able to get a proper offer in return for his services:

Multiple teams are saying the Indiana Pacers are listening to pitches on Malcolm Brogdon and are monitoring Domantas Sabonis as well. On Brogdon, the belief is the Pacers feel Caris LeVert can man the point guard adequately enough should they get a real deal for Brogdon, who’s in the second year of a four-year, $85 million contract. The Clippers have been scouring the league for more point guard help, so add his name to the list with Lonzo Ball, Terry Rozier, Ricky Rubio and George Hill.  [Yahoo!]

A note before we get rolling on Brogdon specifically: I am a bit dubious of the idea that the Pacers believe Caris LeVert can hold down point guard duties moving forward. He's a fine enough secondary playmaker and certainly a valuable scorer, but the Pacers asking him to be the primary table-setter feels somewhat unlikely if you're asking me.

Setting that aside, Brogdon being on the market would be a gamechanger. We're talking about a starting point guard in his prime years on a solid contract with a skill set that fits into just about any good team around the league. Any team who would take the plunge would be getting Brogdon for the rest of this season and at least the next two on top of that, with his salary topping out at $22.6 million in 2022-23.

For what Brogdon offers, that's more than fair. Brogdon has been an efficient, fluid player from basically the moment he entered the league. Outside of a tough year from deep last season — one that was limited to 54 games due to injuries, mind you — Brogdon has been a knockdown shooter for his career. He's particularly lethal as a catch-and-shoot guy and has returned to form there this year, hitting 44.1 percent of those shots this season (and 39.8 percent from three overall). That allowed him to round out the Bucks lineup for the team he started his career with, flanking Milwaukee's top pair of Giannis Antetokonumpo and Khris Middleton.

In search of a place where he could stretch his wings a bit more, Brogdon landed in Indiana. With the Pacers, he hasn't necessarily shown things he didn't do in Milwaukee, but he has been able to showcase the rest of his game at higher volume. He has proven to be a credible scorer out of the pick-and-roll, a thoughtful playmaker who doesn't turn the ball over much, and an efficient scorer even after upping his volume for Indiana. The Pacers have admittedly been below average this season, but Brogdon has been a metronome for them, averaging 21.6 points, 4.7 rebounds, and 6.1 assists per game on 46/39.8/87.7 shooting splits.

Defensively, it's fair to point out the Bucks got better after his departure by putting bigger and more athletic defenders on the floor instead, but he's solid on that end, in possession of a 6'11" wingspan, a good amount of strength, and the smarts to make up for some of what he lacks in top-end explosiveness.

Brogdon does have his limitations. His inability to generate free throws would add to a problem the Sixers already have outside of Joel Embiid, and ideally you'd like him to put more pressure on the rim than he does. His three-point volume has increased this season, a welcome sign, but historically Brogdon has been a little more reluctant than you'd expect a shooter of his caliber to be. Brogdon has also had some issues staying healthy in recent seasons, maxing out at 64 games played in the four seasons following his rookie year.

That said, Brogdon is an appealing target because of how much he brings to the table without taking anything off of it. A year-and-a-half into being a leading man on a middling Eastern Conference team, perhaps the idea of being a valuable starter further down the pecking order appeals to him more now.

For Philadelphia specifically, Brogdon would boost their on-ball creation and give them more lineup flexibility than they have now, potentially solving some of their second-unit concerns. Lineups with Brogdon manning the point and Ben Simmons unleashed as a roll man could terrorize backups, and the Sixers could theoretically go from not staggering at all to staggering two-man groups of high-level starters. He fits in any combo you could hope for — he's also a great outlet for a Joel Embiid post-up and a better handler for Tobias Harris-led groups than they have access to currently.

The primary issue, if we assume he's available in any way, is that the cost is likely to be expensive. A good guide for this trade, I believe, is the Jrue Holiday trade made during last offseason. Aside from outgoing veteran salary, the Bucks traded two first-round picks and two future pick swaps for the right to go get Holiday, a costly move aimed at securing Giannis' long-term commitment and improved playoff chances.

Holiday is a better defender and a different sort of offensive player, but he's also slightly older and has a player option this summer compared to Brogdon's future contract certainty. Brogdon appeals to teams of all sorts — he's a guy who could help a contender right now, but he's also got some intrigue to a team trying to find some help for a young and developing core, which opens the door for a larger group of potential suitors.

Perhaps the Sixers could cut into that value by including young players with upside, something the Bucks did not offer in their deal with New Orleans. At the very least, Brogdon's salary would require the departure of Danny Green, whose salary number we have stressed over and over again is essential to any sort of big move.

But here's why it still might make some sense for Philadelphia — if you're comparing this trade to, say, a deal for Lowry, you can justify a trade for Brogdon as a move made for both the short and long term. While he doesn't move the needle quite as much as Lowry, Brogdon will be just 30 years old when his contract expires, with the potential to be a high-level player still on the next contract he signs. That matters off-the-floor as much as it does on it — if the marriage doesn't work out for either party, the Sixers would still have avenues to recoup value or flip Brogdon for someone/something else of value in a move down the road.

As an additional note here, this brings up an underrated part of the value of trading for Lowry that we haven't talked about much — there's a bit of insurance if the Embiid-Simmons partnership blows up for one reason or another over the next couple of years that changes their stance on trading Simmons. Having a capable ballhandler still on hand opens up options for who they could potentially target in a return trade. But this is admittedly a side benefit, as the true value of the deal is the hand-in-glove fit Lowry or Brogdon would offer playing next to Simmons, with each rounding out the lineup for one another in a symbiotic fashion.

Acquiring Brogdon feels like a moonshot, but it's one worth considering and at least looking into on Philly's end because of the value they'd get across the board. He'd be an excellent fit that leaves them with a ton of flexibility even if they have to part with a chunk of assets to make it happen. He's not Bradley Beal or Zach LaVine, admittedly, but Brogdon is the sort of player who could potentially make the Sixers an even better version of the team they already are.