What went wrong in Sixers' late-game collapse vs. Brooklyn? 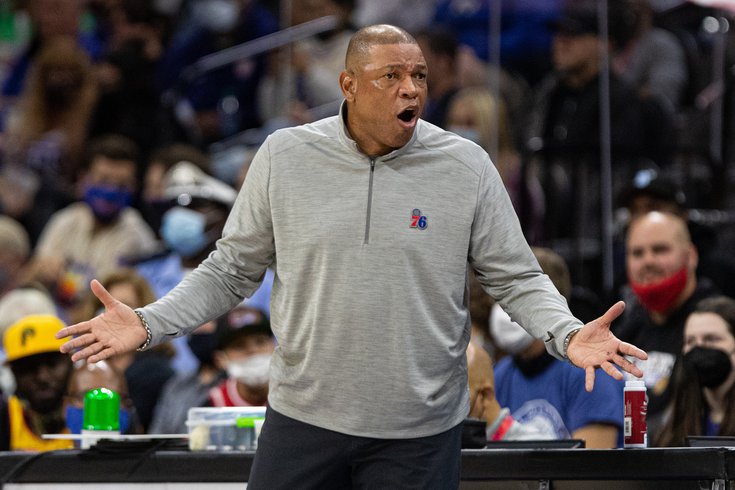 With five minutes and change left in Friday's tilt against the Brooklyn Nets, Matisse Thybulle slammed home a lob from Tobias Harris in transition, pushing Philadelphia's lead to double digits and sending the home crowd into hysterics. It felt like the exclamation point they needed at the end of a pretty good performance from the home team until they actually attempted to close the game out. The Sixers would score just one more point after Thybulle's dunk, a made free throw on an intentional foul from Brooklyn, dropping the home opener 114-109.

Starting at the top

If there was an overarching reason the Sixers jumped out to a lead against Brooklyn and kept it for most of the game, it was their pace and purpose. Between Danny Green knocking down back-to-back threes in transition, Tobias Harris setting the tone as a face-up scorer, and Seth Curry pulling up over and over again even with defenders in his face, this was a group who got to spots early and let it fly without fear of failure. If there was any fear of the Nets, it didn't manifest on the floor.

At least that was the case until the final five minutes. After getting out in transition and hunting early offense most of the game, the Sixers slowed to a crawl late, possessions taking too long to develop and ending in rush jobs. Doc Rivers said after the game, backed up by his players when they spoke later, that they just failed to execute when it mattered.

"I thought we started walking the ball up the floor, and then there were two or three plays where we didn't execute things that we've worked on," Rivers said. "The good sign for me is how well we played, the bad sign is that we can't finish games that way...they were switching throughout the game and we were attacking the switches, then all of a sudden we decided not to."

It felt that way in the moment, but I'm not sure I agree after a rewatch. Frankly, the Sixers' best players, Joel Embiid first and foremost, were simply not good enough in the final minutes. They got Embiid decent looks at the basket, played relatively competent team defense against the Nets, and ultimately were undone by an inability to make shots and some poor decisions when it counted.

How much of that was due to Embiid's sore right knee? He told reporters after the game he's not sure he should have suited up for this one in the first place, a worrying sign two games into the season for a guy who has constantly dealt with health woes during his career.

But I'm not inclined to let him skate for that. Historically, the Sixers have struggled to exploit weak defensive bigs the way they should as a result of their style of play. LaMarcus Aldridge, who was excellent on Friday night, is one of many bigs who is at his best defensively when you ask him to make defensive plays in space. While a healthy Embiid might be able to move him off of his spot with ease, he has his best chance when you simply ask him to be long and strong in front of an opposing center.

Playing through Embiid, that's exactly what happened down the stretch on Friday. Ultimately, the play below ends in an airball three from Danny Green on the wing, but everything that leads up to that moment is brutal. Embiid has it poked away trying to post Aldridge up, and instead of committing to a screen on Seth Curry's man (Jevon Carter), he just sort of meanders out to the perimeter, failing to put any pressure on Brooklyn to switch.

Embiid may have had a case for a foul call when he took Aldridge deep into the post on a possession later in the fourth, but not getting a foul call in the final two minutes should be the expectation, and it highlights the difficulty of playing through Embiid in those moments, complete as he may be compared to other big men.

"The end of the game, you see it in the playoffs too, that's where you need elite shot creators," Embiid said. "Last season, especially the regular season, I was that guy. Tonight, I just couldn't. But in the future, I think we'll be fine. Tonight was just one of those nights where, I mean I probably shouldn't even have played. But it's good to be out there with the guys and fighting for every game."

The knee issue now becomes something of a lasting concern, given how Embiid looked at times on Friday, and especially after he insisted that he wanted to keep playing and remain available to his guys in the days ahead. A day off to let him recuperate a bit would be a prudent move, especially with a date against the Oklahoma City Thunder up next on the calendar. If they're not going to sit him while he's in pain during a game against a team not trying to win this year, you'd have to question their approach to managing him this season.

And while Embiid had physical excuses to lean on in those moments, there was no knee soreness to blame on the stupid foul he committed on LaMarcus Aldridge that allowed Brooklyn to take their first lead of the game with under a minute to play. There would have been no shame in giving up a basket here — Harden makes a great play to find LMA under the basket, and the Sixers could have lived to fight another day. But after getting away with smacking Harden in the face on the entry, Embiid flails wildly at the ball as Aldridge goes up, ultimately resulting in an and-one.

He was not the only Sixers starter to come up short late. Seth Curry bricked a free throw that should have been a freebie, Tobias Harris missed an uncontested eight-footer, and Matisse Thybulle straight up gave the ball away after inexplicably being handed the responsibility of inbounding the ball late. It has to start with the big guy, though, who simply has to be better than this when it counts.

(Alright, seriously though, I can't resist showing the Thybulle pass on the inbounds. Why is he in for an offensive late-game play in the first place? The Sixers could have easily subbed him out for someone else during the free throws prior to this botch job.)

Just no way to get around this. Horrific job by the veteran shooter down the stretch.

Doc Rivers sitting on his challenge

The aspect of this game that drew the most outrage, at least online, came in the coaching department. And the blowback was more than justified — Rivers continued a pattern of being overly conservative with his challenge, helping to seal Philadelphia's fate in the process.

There were at least two plays where there was a case for Rivers to challenge, the most obvious being Tobias Harris' defensive possession vs. Kevin Durant, where a deflection appeared to go off of Durant's leg before going out of bounds, the ball initially awarded to Brooklyn. Thanks to the great Rich Hofmann for clipping this play and sparing me the trouble of doing it myself, because we came to the same conclusion on the play and the process.

Rivers said that his assistant behind the bench who looks at the plays gave him a thumbs down on both this play and the charge call.

If that is indeed the case, the Sixers need to revisit their process. Completely inexcusable not to attempt one here. pic.twitter.com/ZosS9FL9Zd

An important change this year: these plays are no longer reviewed when games are under two minutes unless a coach challenges the call. And Rivers, as he explained to reporters Friday evening, claimed he was simply following advice from another person on staff.

"We have a guy on our bench that looks at them and he had his thumbs down on all of them," Rivers told reporters.

If that's truly the case, you need to have somebody else working their thumbs on the bench, and even if it is, the head coach has to take a level of responsibility at some point. Rivers has consistently erred on the side of caution with his challenge under the premise of keeping timeouts available, but this was a high-leverage play in a spot where you could have taken possession, maintained the lead, and even used the stoppage to talk things over with your team while the officials reviewed the play.

Rivers had a second opportunity to use the challenge moments later, when Kevin Durant ran over Danny Green in transition and managed to get a blocking foul called on Green. It was a borderline call, and had Rivers used the challenge I think he may have lost it, but it was telling that Mark Jackson absolutely hammered Rivers on the broadcast for sitting on the challenge. Former coaches are inclined to circle the wagons and give coaches the benefit of the doubt when a managerial error takes place during a game, and Jackson went the other way on Friday, joining thousands of Sixers fans in disbelief that Rivers wouldn't simply pull the trigger.

The challenge is a tool in Rivers' arsenal, and for whatever reason, he often neglects to use it. Having it in your back pocket for late in the game is one thing, and you won't always have opportunities that make sense to burn it on. An NBA coach and coaching staff should be able to identify the easy ones, and whether he likes it or not, Rivers has to find a way to make use of the challenge instead of hoping the breaks of the game always fall Philadelphia's way.