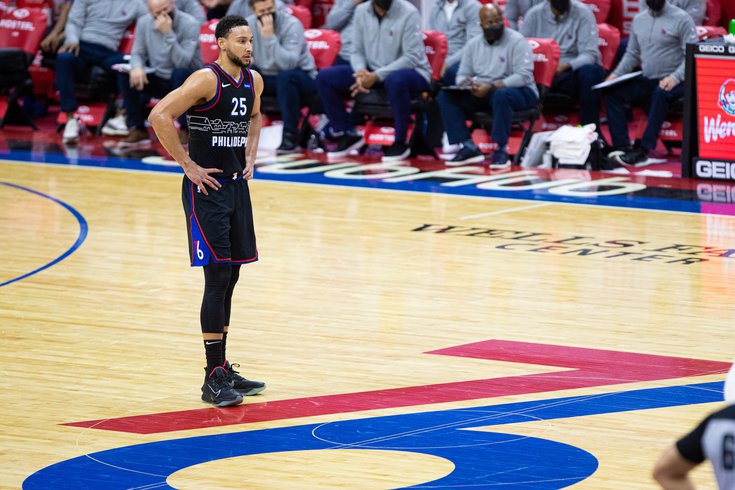 Following a long absence and a tumultuous return to the organization last week, Ben Simmons finally met and spoke with Sixers teammates on Friday morning, telling them he is not mentally prepared to play for the team yet after trying to force a trade elsewhere for the last four months.

Friday morning brought a series of meetings for the Australian, who met with Doc Rivers, medical staffers, and finally his Sixers teammates prior to their game against Brooklyn. Sources familiar with the situation remarked that Simmons was more engaged and open to discussion with the team than he had been prior to Friday, and while teammates have insisted their conversation will remain private, they ultimately offered public support for Simmons in light of reporting on the situation Friday afternoon.

And we’ll respect his privacy and space during this time. When he’s ready, we will embrace our brother with love and handle our business on the court. That's it, that's all. https://t.co/eardjmQbz8

"I think we left the meeting understanding what he had to say, and we came out and got ready for Brooklyn," Georges Niang said following shootaround on Friday.

The Sixers, who have offered mental health resources to Simmons (and all their players) in the past in the event he felt he needed them, doubled down on that approach Friday after Simmons spoke with medical staffers about his current frame of mind, offering to help Simmons obtain whatever he might need. There are plans for Simmons to meet with medical professionals following the series of meetings he had at the practice facility, as ESPN's Adrian Wojnarowski first reported on Friday afternoon.

Given the nature of Simmons' holdout, there are cynical outside eyes trained on Simmons for the time being, noting a series of high-profile leaks and claims from Simmons' camp that they would do whatever is necessary to get him out of Philadelphia. That included threats to sit the entire season, apathetic showings at recent practices, and a back tightness claim that some in the organization saw coming ahead of Simmons declining to go through an individual workout on Thursday. A financial oversight by Simmons' representation also played a role in Simmons showing up to Philadelphia last week, with the Sixers levying almost $2 million in fines at Simmons up to this point.

It is important to note, however, that this is not the first time Simmons has made note of the mental component involved in his game, having touched on the subject briefly during his press conference after Game 7.

"No, I'm not going to let you say that," Simmons said when asked if there was a factor that made him a different player in the postseason compared to the regular season. "We lost, it sucks. I am who I am, it is what it is, it's not easy to win and it shows. Nets got finished by the Bucks, it's not easy to win. And I work. I think the first thing I'm going to do is clear my mind and get my mental right."

The Sixers' internal position has been consistent throughout this process — unless a trade for an impact player becomes available that can help the team and fulfill Simmons' desire to play elsewhere, the Sixers would prefer to reintegrate Simmons with their current group and attempt to win a title together. Daryl Morey said Thursday during a radio interview that the team would be willing to let this play out for the duration of Simmons' contract if that offered the best opportunity for the Sixers to win a championship, distraction or not.

"You're going to think I'm kidding, I'm not, this could be four years," Morey said. "The conditions I'm pointing out to you don't change. Unless Ben Simmons is traded for a difference-maker, we're in the prime of Joel [Embiid]'s career. We have to get back either Ben Simmons playing well for us, who helps us win the championship, or we have to get back a difference-maker for Ben Simmons. Or this could be four years from now, and we're still like, 'Hey, we took the best shot at it we could.'

"This could be four years. This is not day-to-day. Every day, we're going to expect Ben Simmons to be back here, or we're trading him for a difference-maker. There's no other outcome that doesn't materially hurt our chance to win the championship in Joel Embiid's prime."

There is no indication yet that Simmons has changed his mind on wanting out, but the Sixers hope Friday's meetings and dialogue are the first step toward reconciliation, however temporary it may be.