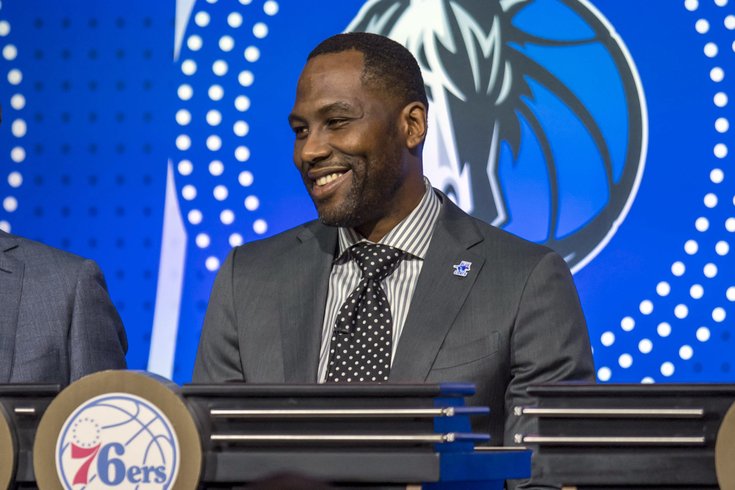 After receiving what was effectively the biggest internal promotion in the front office this summer, Elton Brand has risen in the ranks once again. A team source confirmed to PhillyVoice that Brand has been named general manager of the Sixers, to be announced at a press conference in Camden later this week.

This news was first reported by Adrian Wojnarowski of ESPN.

As it was explained to PhillyVoice by team representatives in late August, Brand's role with the team this season was going to be quite different than it is now. The initial change for Brand was transitioning his focus from the team's G-League affiliate to a more broadly-distributed role.

Prior to this new promotion, Brand was expected to dedicate time to the big league club and be part of the parent club's ultimate decision-making process, a source told PhillyVoice in late August. The Sixers, as they did when he was brought back as a player in the dog days of "The Process", expected him to serve in some capacity as a "big brother" to their players. But the meatier part of his August promotion was gaining input on front-office decisions for the 76ers.

Now, things have taken an even sharper turn for Brand. To say this is a meteoric rise is a bit of an understatement — as recently as December 2016, Brand was just being hired as a player development consultant, having just announced his retirement as a player in October 2016. Brand was then promoted to general manager of the team's G-League affiliate (Delaware Blue Coats) in August 2017, and has since received two rounds of promotions this summer.

In a span of less than two years, Brand has gone from retiring as a player to leading the organization he last played for. With an unprecedented opening for a team with two young stars under contract coming off a 52-win season, the Sixers are going with someone that has zero executive experience at the NBA level.

Compare Brand's managerial background to even someone like former GM Sam Hinkie — effectively referred to as a "science experiment" by Joshua Harris earlier this summer — and the reality of his inexperience comes into play. Hinkie joined the Rockets as a special assistant to the GM in 2005, spending eight years working in front office positions for Houston prior to being hired as the lead dog in Philadelphia.

That's no commentary on how fit Brand is or is not for the job, and he certainly made a strong impression on the powers that be in order to receive a promotion to this level. Even dating back to his playing days, Brand has long been respected as a sharp mind cut out for a role in basketball ops once his career was over, and he is almost universally respected within players circles. We ultimately have no real track record to judge him on — he is in some respects the biggest blank canvas of all the possible candidates.

But a move of this sort demands explanation on behalf of the Sixers, starting at the very top with ownership. Joshua Harris offered a series of quotes to Wojnarowski in August on their search for a GM, and did a bit of crowing about how attractive the situation was for potential candidates (bold emphasis mine):

I think we have one of the best, if not the best, situation in the NBA -- particularly for the leader of a front office. We have great young players, lots of cap space and stable ownership willing to invest and spend in the team. We're going to be patient and try to find the right person. The next year is going to be incredibly important for us, and we have a real desire to find the right person now -- but if not, we are incredibly comfortable with the existing staff and we'll move forward from there.

The beginning of that statement is hard to argue with, but ultimately it's hard to prove the value of having the self-proclaimed "best situation" if the outcome of your search is elevating an unproven internal option to take the GM's chair. Reports over the summer suggested the Sixers aimed as high as Rockets GM Daryl Morey for the opening, only to be rebuffed. To land on Brand after aiming that high is quite a change of pace.

This all becomes a little more striking when you consider the gravity of a general manager's job. Brand is going to have significant say in all levels of the organization no matter what the eventual power split looks like. That means balancing priorities like in-season trades and acquisitions, scouting and the NBA Draft, salary cap expertise and management, among dozens of other responsibilities.

That can ultimately be balanced out with a smart distribution of roles, but how the power in Philadelphia will be split is still not completely clear. Team representatives would only comment to say the organizational chart would become clear at Thursday's press conference.

A team source who spoke to PhillyVoice insisted Brand would have, "ample authority," and that he would have the authority to make basketball ops decisions as the leader of the group including Alex Rucker, Marc Eversley, Ned Cohen, and their respective underlings. Brett Brown's feedback and input will continue to be valued internally, a source told PhillyVoice, but would not comment on where he will stack up in the new setup beyond saying he would not likely have the authority to overrule Brand outright.

If this sounds like I'm beating up the team and Brand individually, that's not the case. A move being unorthodox does not make it inherently bad, and Brand's aforementioned lack of track record makes it so we are simply guessing at what his future looks like as an NBA GM. The other members of the front office have years upon years of experience among them, and will be able to aid Brand in his new role with all their combined knowledge of the league's machinations on the executive side.

And though this ultimately says nothing about how qualified (or not) Brand is for the job, the league's racial and ethnic distribution at the player level has long been wildly different than that at the coach and executive level. There are countless reasons for that we don't need to get into here, but the interview process in pro sports often recycles the same members of the "old boys club" at the expense of candidates with new ideas, perspectives, and backgrounds. On some level, Brand's promotion is a positive for both the league and the organization individually.

But Brand's elevation will ultimately only be judged on what the team can accomplish under his leadership, and we have very little information to determine whether he'll be good at this job or not. It has been a wait-and-see offseason for the Sixers, from their free agency plans to their draft-day acquisition of a project like Zhaire Smith. Their new front office leader is now the most prominent figure on that list.