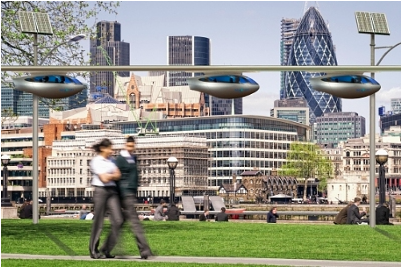 Visualization of how SkyTran, a NASA Space Act company, would integrate its air taxis into the urban landscape.

Air taxis of the near future aren't exactly straight out of "The Fifth Element," but California-based SkyTran's pilot program for an aerial mass transit system could be a big step toward proving the concept feasible.

In a partnership with Israel Aerospace Industries, SkyTran will deploy the technology in Tel Aviv with a 900-foot system consisting of a car that magnetically glides aboveground at an elevation between 20-30 feet, CNN Money reports.

The test car, which holds four people, can travel at a speed up to 60 mph without the stop-and-go of the traffic below. If the pilot is successful, the company plans to add several cars to the Tel Aviv system and expand to three other Israeli cities. The systems could reach the U.S. by 2018, if all goes according to plan.

Jerry Sanders, CEO of SkyTran, explained that overhead transportation, made from steel and aluminum, is significantly cheaper to construct and maintain than underground systems that range between $100 million and $2 billion per kilometer. The SkyTran system can be erected in a matter of days for $8 million per kilometer, while the cars cost between $25,000-$35,000 apiece.

The air taxis work using magnetic levitation, in which electromagnets lift and propel the cars forward using a third of the energy to fuel a hybrid car.

In the United States, cities including Baltimore and Inglewood, California, have expressed interest in the SkyTran system. And with a multimillion dollar seed investment from Google chairman Eric Schmidt's Innovation Endeavors venture fund, air taxis could become a reality in the U.S. sooner than later.

Take a look at how the system would be incorporated into a city's infrastructure in video presentation below.