Slippery sights and results from the 2016 Broad Street Run 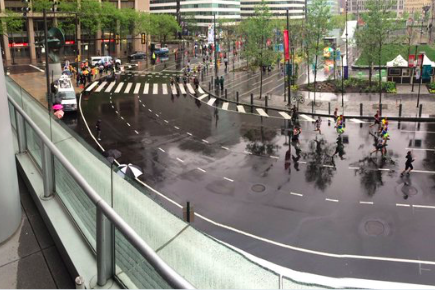 True to the character of Philadelphia, even wet and chilly conditions weren't enough to stop about 40,000 runners from packing the streets Sunday morning for the 17th Annual Blue Cross Broad Street Run.

Related Article: Everything you need to know about the Broad Street Run

The race began at the Central High School at Somerville Avenue and Broad Street and culminated at the Navy Yard in South Philadelphia.

And they're off! The 17th Annual Broad Street Fun Run has begun. #BCBSR16 pic.twitter.com/zsCFLXuwMu

Results from the race's first corral of runners are in and this year's best time of 45:08.28 belongs to Conshohocken's Andrew Hohorst, who clocked an impressive 4:30 per mile. His finish puts him more than two minutes ahead of last year's winner, New Yorker Haile Mengesha, who recorded a 47:53.58 time to claim first place among men. New York City's Abebe Mekuria (48:42.58) and White Plains native Mathew Kiplagat (48:50.74) held second and third in the men's category, while Philly's own Justin Garrard (50:06.72) held ninth.

The rest of the race results can be found here.

And of course, no Broad Street Run would be complete without plenty of photos and videos.

Transit Police Officers in the Broad Street Run are disappointed because I ordered them not to come in first place. pic.twitter.com/TQjye6iqFh

As I have always said, rain is not an issue when you stay focused and seriously commit to posting about the Broad Street Run! #myfightsong