Get a mental break on the go 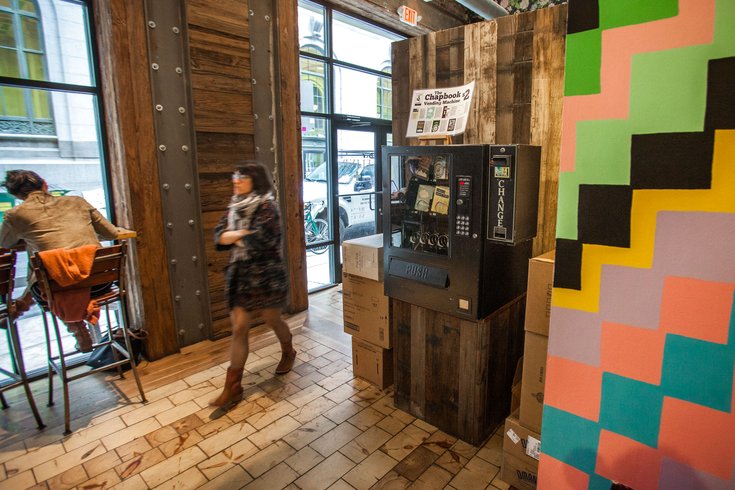 The Head and the Hand's chapbook vending machine at Elixr, 207 S. Sydenham St.

Vending machines aren’t just your break from the office anymore. Instead of snacks, they dispense knowledge, in the form of chapbooks, hi-tech gadgets and quizzes, and merge instant gratification with everyday needs. In Philly and beyond, they’re expanding; from pot in Seattle to gold bars in Dubai, the range of applications for smart vending machines is as broad as your imagination. Here’s a look at machines that feed your mind and get you ready for the world.

Writer, meet coffee shop. A chapbook vending machine from local craft publisher the Head and the Hand dispenses $2 chapter-length prose, the cost of buying a cup of coffee – or, realistically, your change from a $5 bill after you already bought one. H&H founder Nic Esposito told PhillyVoice the inspiration for came from talking to his uncle’s cousin at a wedding about merging the 50-year-old family vending business with Esposito’s love of literature.
Tomes in the Breadbox Chapbook Series offer a bite-size snapshot of an author’s work from a stable of about 20, including "Waveland" by Simone Zelitch, part of a full-length novel about the civil rights-pioneering Summer of 1964. The machine has been on the move. It's made stops at Elixr, Honeygrow, Milk & Honey and the Science Leadership Academy, and has gone back to Elixr, where more than 500 copies have been sold.
“We really want to work with [writers] to get chapbooks produced, in the hopes that these chapbooks will really kind of jump-start their writing,” Esposito said. 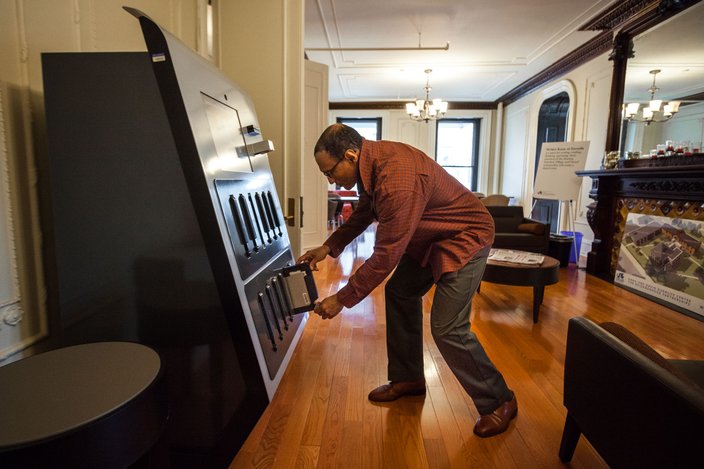 Learning just got a lot easier. In March, Drexel and the Free Library of Philadelphia teamed up to make iPads available to card-carrying members of each organization. The kiosk, located at the Dornsife Center neighborhood hub, offers Drexel students and residents of the surrounding Mantua and Powelton Village neighborhoods access to the iPads for four hours at a time. Digital storytelling tools are among the 68 apps included on the iPads. Digital is the future of education, particularly for the Free Library.
“Our core mission is to advance literacy in Philadelphia. There is no literacy without digital literacy nowadays,” said Sandy Horrocks, vice president of external affairs for the Free Library.

Meet the original art vending machine. Artist Clark Whittington launched a chain of converted cigarette machines in 1997 that promote and dispense artwork from 400 artists around the world. After its debut at Whittington's exhibition in North Carolina, the concept won support from other artists. Knick-knacks include keychains, jewelry, phone cases and greeting cards - and none are bulkier than a pack of smokes. Local machines can be found at Bucks County Free Library branches in Bensalem, Yardley and Doylestown and elsewhere at Whole Foods and coffee shops across the country.

In a genius, Pavlovian move, execs at Campbell Soup Co. installed a smart snack machine at their headquarters in Camden. The so-called Snackbot dispenses snacks like cookies and even prizes like GoPros in exchange for employees correctly answering two of three trivia questions about the company. Designed by Philly- and Boston-based firm Allen & Gerritsen, the intelligent food terminal represents the convergence of games and branding.
“Snackbot was developed for Campbell to explore gamification and how consumers interact with technology and brands in new and interesting ways,” Tom Hushen, senior manager, external communications, told PhillyVoice.