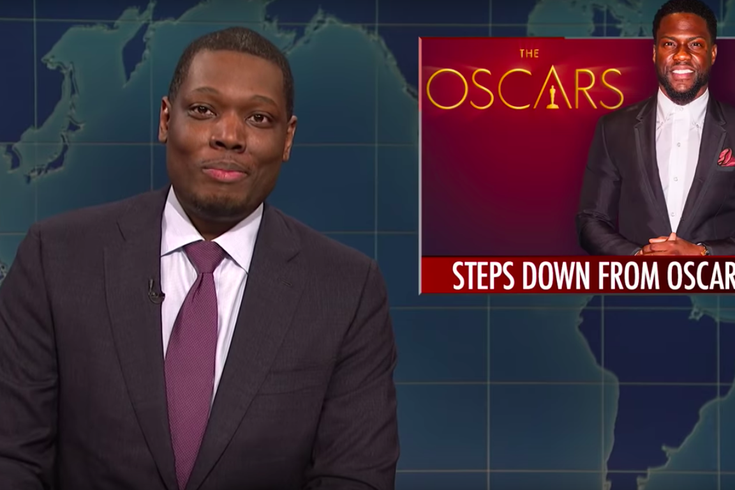 "Weekend Update" host Michael Che made a few jokes about the Kevin Hart controversy surrounding the Oscars on the Dec. 8 episode of "Saturday Night Live."

In what some are calling a dud of an episode of "Saturday Night Live" this week, "Weekend Update" hosts Michael Che and Colin Jost made mention of Kevin Hart and the Oscars controversy.

Che poked fun at Hart, who came under fire this week after he was selected to host the Academy Awards and then shamed for homophobic tweets he made in 2011.

The Academy called for Hart to issue an apology or they would be looking for a new Oscars host, and Hart initially declined to apologize. He said he had previously addressed those tweets and didn't need to revisit his feelings.

But hours later, Hart issued an apology on Twitter and said he would step down as host so as not to "be a distraction on a night that should be celebrated by so many amazing talented artists," he tweeted.

I have made the choice to step down from hosting this year's Oscar's....this is because I do not want to be a distraction on a night that should be celebrated by so many amazing talented artists. I sincerely apologize to the LGBTQ community for my insensitive words from my past.

I'm sorry that I hurt people.. I am evolving and want to continue to do so. My goal is to bring people together not tear us apart. Much love & appreciation to the Academy. I hope we can meet again.

On Dec. 8's episode of "SNL," during "Weekend Update," Che pointed out the hypocrisy in Hollywood but didn't make much of the joke. He did add a Bill Cosby riff in there, though.

Jason Momoa hosted "SNL" this week and apparently saved the show. Mumford and Sons was the musical guest.