Snowstorm taking shape for the weekend 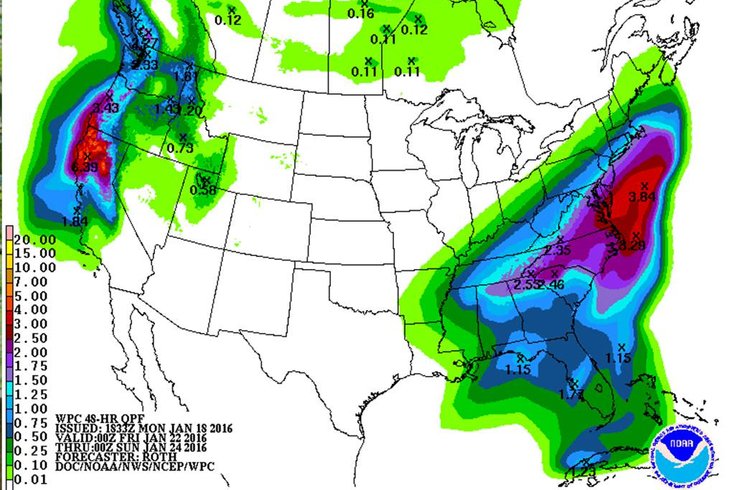 NOAA's 48-hour Quantitative Precipitation Forecast is showing expected amounts of melted precipitation in the 1.5 inch-to-2-inch range associated with a winter storm due this weekend. On average, one inch of liquid translates to about 10 inches of snow.

A bit of light snow could again fall on Philadelphia-area streets on Wednesday, but all eyes are on the weekend, as the threat of a more significant snow event begins to take shape.

At this point, the National Weather Service says, a powerful storm is possible, bringing widespread snow and heavy winds in the immediate Philadelphia region from Friday night to Saturday night, and a rain-snow mix at the Jersey Shore and points south, as a surface low and upper level trough lift out of the Southeast. Potentially moderate-to-major coastal flooding is possible with a strong on-shore winds and a full moon Saturday.

RELATED: Winter weather checklists to get ready for snow

The exact amount of snow that will fall here is up in the air, as there is little agreement in weather models right now, forecasters said. There is some indication that the surface low may trend further south. And forecasters will have a better idea on Tuesday night or Wednesday morning when the trough, currently off the West Coast, moves inland. Still, a major snow event remains possible.

Meanwhile, the Arctic airmass responsible for the lower-than-normal temperatures since Sunday night will remain for a while, with the mercury dropping to 15 degrees on Monday night as gusty, frigid winds persist. It will feel closer to 0 degrees. Tuesday will see a daytime high of 24, before the mercury falls to 18 at night. Temperatures will rebound slightly on Wednesday.

Here is the National Weather Service forecast through Sunday night:

A chance of snow showers after 8pm. Mostly cloudy, with a low around 23. West wind 6 to 8 mph. Chance of precipitation is 30 percent. New snow accumulation of less than a half inch possible.

Mostly sunny, with a high near 38.

Partly cloudy, with a low around 24.

A chance of snow after 8am. Mostly cloudy, with a high near 34. Chance of precipitation is 50 percent.

Snow likely, mainly after 8pm. Cloudy, with a low around 27. Chance of precipitation is 60 percent.

Snow likely, mainly before 8am. Mostly cloudy, with a high near 36. Breezy. Chance of precipitation is 60 percent.

A chance of snow. Mostly cloudy, with a low around 26. Chance of precipitation is 50 percent.

A chance of snow. Mostly sunny, with a high near 38. Chance of precipitation is 30 percent.

Partly cloudy, with a low around 24.