So, Colin Kaepernick wants out of San Francisco: What does it mean for the Eagles? 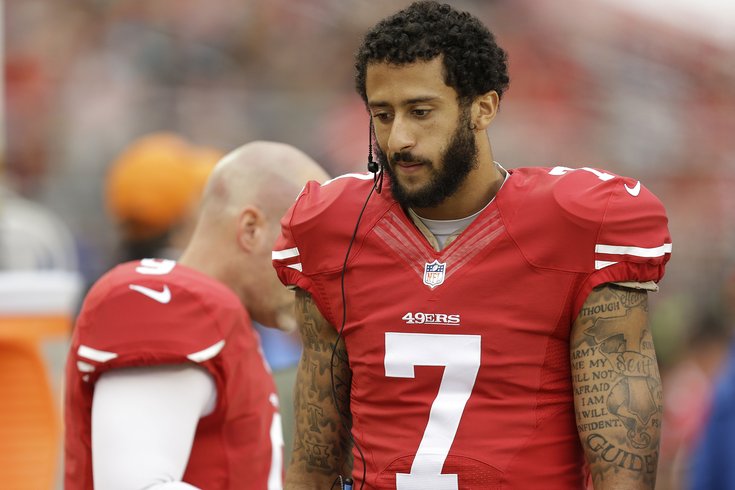 Source: Kaepernick's agents have requested permission from the team to seek a trade.

Since the Eagles have an unsettled quarterback situation of their own, let's review how this may affect them:

Should the Eagles pursue Kaepernick?

Well first, should the Eagles pursue Kaepernick if he were to become a free agent? In short, no. So obviously, the answer to whether they should trade for him is "God no."

To begin, Kaepernick's contract is not at all appealing. In 2016, if the Niners keep him, he'll count for $15,890,753 against their cap. Any team trading for him would get a slight break (he'd count for about $13 million and change), but his cap number would accelerate significantly in 2017 and beyond. It's fairly clear that the marriage between Kaepernick and the Niners is going to go down in flames, so why would anyone give something up of value to take on a struggling player with a bad contract when it's fairly likely he may become available if the Niners simply cut him.

As for Kaepernick the player, he's probably a bad fit for the Eagles' offense. Obviously, it's still only February, so projecting the kind of offense the Eagles are going to run under Doug Pederson is a bit of a guessing game, but there's a decent bet it will employ its fair share of "West Coast" concepts, which means getting the ball out quickly.

In 2014, Kaepernick took 52 sacks. That was second worst in the NFL, behind only Blake Bortles. In 2015, at the time he was benched, he was on pace for 56 on the season. Over his career, Kaepernick has taken a sack every 10.1 pass attempts. That is emblematic of a quarterback who is not making quick decisions with the football.

As a passer, he was among the league worst in nearly every statistical category in 2015. Here is where he ranked among 34 quarterbacks with enough "qualified" pass attempts:

Typically, you see quarterbacks get better as they gain more experience. That has not happened with Kaepernick, as he has had a steady decline to awfulness:

And the decline hasn't just been as a passer. It has been as a runner too:

Back in early February, Manish Mehta of the New York Daily News reported that Kaepernick wanted out of San Francisco and that the Jets are his team of choice. Frankly, Kaepernick should just be happy if he can find a place to start anywhere next season. But it won't be in Philly.

Earlier this week here at the NFL Combine, Niners GM Trent Baalke was asked what he thought of Bradford as a player.

"We didn't play (the Eagles) last year, so I haven't studied him, relative to what he did with (Kelly's) offense," said Baalke. "But he's a good football player, and he made a lot of plays for them. He does a lot of good things. Without having great working knowledge, once again, I have not studied him in-depth."

Free agency begins in less than two weeks. If the Niners had interest in Bradford, the general manager of the team would have certainly studied him "in-depth" by now.

If we're to believe Baalke's words, one could glean that the Niners have no interest in Bradford. Of course, this is smoke screen season.

How could it affect the draft?

If the Niners liked Kaepernick and truly wanted him to be there (I have my doubts), then in theory, they might not be players for a quarterback in the draft. However, if San Francisco is going to head into the draft with just Blaine Gabbert at quarterback, they're going to be prime candidates to take a quarterback sitting at the number seven spot in the draft.

Of course, if some other team, like the Browns for example, liked a combination of Kaepernick and a blue chip positional player in the draft better than a rookie quarterback at pick number two, then that would eliminate them from competition for a quarterback. However, in the Mehta scenario above, if Kaepernick went to a team like the Jets, that doesn't help the Eagles at all.