Crews, equipment show up at site of planned development on Jewelers Row

A New Jersey company is drilling along the street as part of soil testing, according to a city official 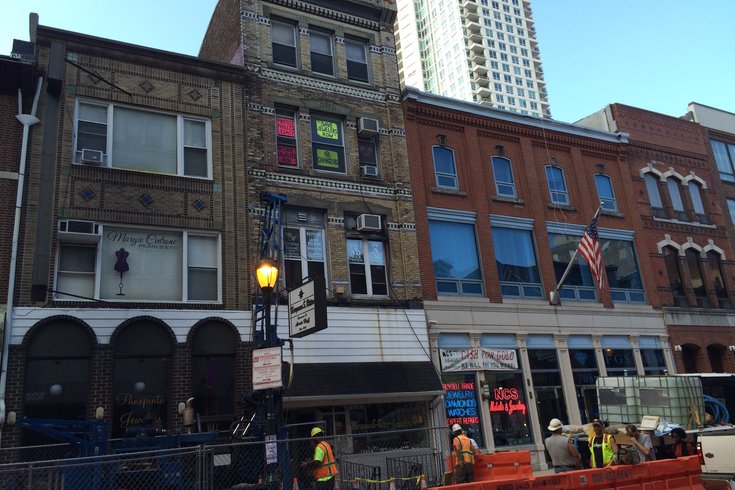 Workers perform soil testing on Tuesday along Jewelers Row, where a new residential project is planned. In a window above the work, signs point to an online petition to "Save Jewelers Row."

Crews and equipment showed up this week on the southeast corner of Jewelers Row, the site of a development plan to build a 16-story residential tower that has raised public opposition.

The crews are conducting soil testing related to the proposed development that would demolish several properties in the historic business community. Testing by the Uni-Tech Drilling Co. of Franklinville, Gloucester County, will be performed on the length of Sansom Street between 7th and 8th streets, through Thursday, according to a permit shared by Karen Guss, spokeswoman for the city's Department of Licenses and Inspections.

Some have speculated that this week's work was the start of demolition work by the developer, Toll Brothers of Horsham, Montgomery County. But Guss said demolition permits have not been issued.

Asked if demolition would be forthcoming, Guss replied not likely anytime soon. She said that L&I is currently evaluating demolition permits for that project and was not sure when a demolition permit could be available.

"Don’t know exact timeline, but it is a ways off," she wrote in an email.

According to Guss, there is a "plan review process" currently underway to "make sure the plan makes sense."

Toll Brothers do not yet own the buildings that would be razed for the project, according to a report in the Philadelphia Inquirer. Though, Guss said that they do have "an agreement of sale" on those properties.

After reports of the plan by Toll Brothers, a Horsham-based real estate company, to demolish five properties between 702 and 710 Sansom St. to make way for a 16-story residential tower, many spoke up to save the buildings.

The Philadelphia Historical Commission plans to consider nominating the existing structures to the historical register at a meeting in October.

An online petition has more than 6,000 signatures opposing the plan to demolish the structures.

In mid-August, however, plans hit a speed bump, as "an error in zoning approval" halted the construction plan until it can be reviewed by city's Civic Design Review Committee.

Soil testing assesses the chemical and geotechnical properties of the soil to determine, in part, the suitability of the soil's strength, density and compaction to accommodate a construction project.

A message left at Toll Brothers seeking comment on the project was not immediately returned.