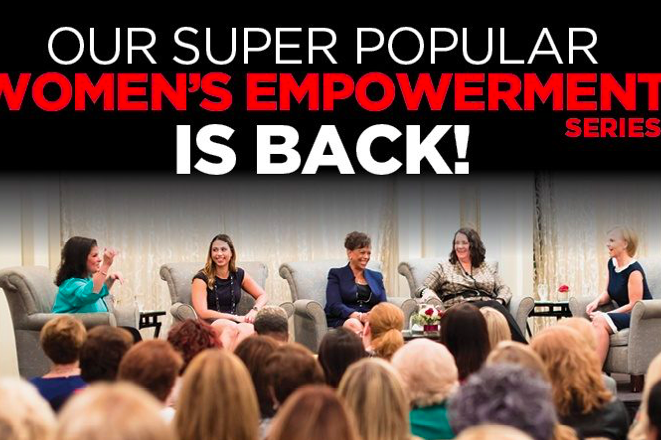 An all-male panel discussion on the topic of "Women in Business" has been scrapped after tweets promoting the event drew a scathing response from critics who found the whole idea tactless and tone-deaf.

The event was planned for next month as part of SJ Magazine's annual "Women's Empowerment Series" on women in business, a popular program that sold out last year. It came under fire Monday when the magazine reminded its Twitter followers of the upcoming event.

TWO MORE WEEKS! Get your tix to our third #WES17 panel, and join us for a fascinating night of personal stories: https://t.co/rVfcDXEErR pic.twitter.com/LWXODLQDkd

This is one of 4 panels (the others are all women). Men have a responsibility to step up & support women & we want to start the discussion.

The response was so forcefully against the idea that the discussion ended up taking place on Twitter.

Are you for real?

No mansplaining allowed?!?! You DO realize that’s entirely the point of this panel, right?!? Men...explaining...women! 😳😳😳

Each tweet convinces me that this will be even more of a hot mess then I previously thought.

The topic of one of those earlier events, for example, was “Gutsy Goals: How you get to the top – and what it’s like when you get there," and it featured Sixers COO Lara Price, SJ Magazine Publisher and Editor-in-Chief Marianne Aleardi and Nyeema Watson, associate chancellor for civic engagement at Rutgers University-Camden, among others.

"It's a bigger series and there's a couple of different organizations that do them," a Rowan University spokesperson said Tuesday on behalf of Houshmand. "When it came up, we said great. Dr. Houshmand has been interviewed about his views on diversity in the workplace and the need for more women in higher education. It's a natural thing to talk about. There's often a knee-jerk reaction on social media that doesn't look into the broader intent. Could the ad copy have been better? Obviously. Hindsight's 20-20."

Some critics of the all-male panel argued that excluding women from the discussion defeats the purpose of supporting women in business in the first place. Others questioned whether any of the panel participants was suitable to lead a conversation based on a track record of experience on the issue of gender in the workplace.

Men have a responsibility to step back and listen to the experiences of their women colleagues. Their "perspective" on us isn't needed.

The discussion should be had by women and men should be the ones listening. That's how you support women in business.

There are better ways to support women than to have 4 privileged middle-aged white men take over the stage. This is tone deaf at best.

Do you understand that a group of men talking about women as if their opinion isn't relevant is WHY THIS PROBLEM EXISTS in the first place?

It's not even the fact that they're men. (OK, it is.) They're not even men who've taken leadership steps towards advancing women's issues

I think you just framed this the wrong way. There's a way to include men in the convo that won't piss people off. It's a tricky gray line.

Wait until you see the African-American panel later that day pic.twitter.com/a4zaPMvaze

Under mounting pressure, SJ Magazine canceled the panel and released the following statement.

A fourth panel discussion, "Success Stories: Taking Charge Without Wearing a Suit and Tie," is still scheduled to be held Dec. 4 at The Mansion on Main Street in Voorhees.