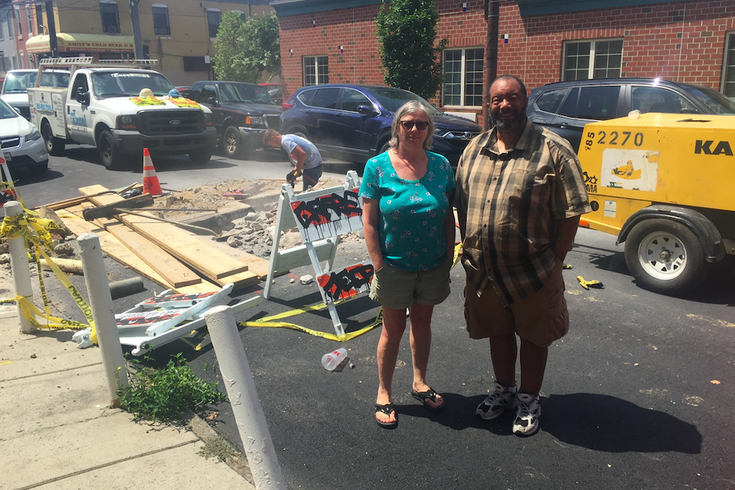 Greg Hammond and Susan Stimmell haven't had water running into their South Philadelphia home for more than a week after a street repaving project apparently sheared an underground line. Their neighbors have already paid for plumbers to come out and repair the line going into their home near 16th and Tasker streets.

For most people, getting the street in front of their home repaved is a net benefit after a temporary inconvenience.

For neighbors on one South Philadelphia block, though, the process has become a potentially pricey nightmare.

Daniel Johnson lives in a rowhome on South 16th Street near Tasker Avenue with his wife and 16-month-old daughter, right next door to Greg Hammond and Susan Stimmell. Their block, just to the north of Tasker, features a lot of vehicular traffic, including SEPTA's Route 2 bus.

On July 31, after the city had milled and repaved their block, the neighboring properties lost water service. Making matters potentially worse, Johnson reported several days later that there was “a river of water running underneath 16th Street and causing a massive sinkhole" on the street.

Despite the public nuisance of a busy street closed to traffic, the confusing mess has forced the Johnsons to shell out about $7,000 to hire a private plumber to fix damage they believe was caused during the repaving project.

They know full well that they’ll have to fight to get reimbursed after getting water back this weekend, but they wanted to go home after staying with relatives in Northeast Philly for a few days.

Hammond and Stimmell decided to take a different approach.

The couple has refused to pay for someone to come out and fix it, even though they were told it’d be at least a week before the city could make repairs. They don’t think they should bear responsibility for the negligence of others. That means no water in their home for a while.

While this story impacts just a small handful of people, it’s an issue that could affect any Philadelphia homeowner.

In this case, the Water Department blamed the Streets Department, according to the neighbors who were later told they’re responsible for the repairs, since PWD customers "must repair faulty plumbing that connects our water main to their home." 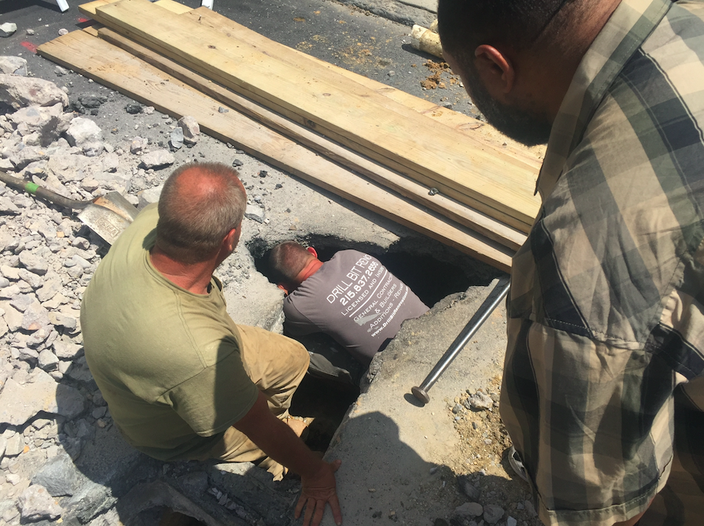 Plumbers hired by residents check out the damage underground near 16th and Tasker streets in South Philadelphia.

"When the Water Department came out last week, the inspector said it's your fault. You need to get a plumber," Hammond said outside his home on Friday. "The next day, there was a hole in the street, six feet from the curb. You could see where the debris had fallen in."

'THERE IS A DIRECT CORRELATION'

Though the hole had been covered with plywood and cones for a few days, a trio of private plumbers were hard at work jackhammering the blocked-off street and working on the water main leading into the Johnsons home on Friday.

Hammond stood near his stoop, speaking over the noisy din about the process that left he and Stimmell loading up on bottled water and heading to friends’ homes or a nearby gym to shower for the past two weeks. His tone belied more matter-of-fact frustration than anger.

“At this time, no determination has been made on responsibility." – John DiGiulio, community relations manager, Philadelphia Water Department

He started chronologically in mid-July, when the Streets Department tore up the street to prepare for repaving. In the days between milling and repaving, a manhole was elevated some four to six inches above the surface.

“The buses, the cars, hit it repeatedly. You could hear it loudly. It sounded like a gunshot, that bang, every time,” Stimmell recalled. The falling debris, neighbors and private plumbers agree, ultimately sheared the line running into their home.

“That was knocking stuff loose near the manhole for three weeks,” added Hammond. “There is a direct correlation.”

He’d just gotten out of the shower on July 31 when, minutes later, he realized there was no more water running into the home.

The days since have brought inspectors from the Water Department to the scene of the damage in an effort to determine what had exactly happened. 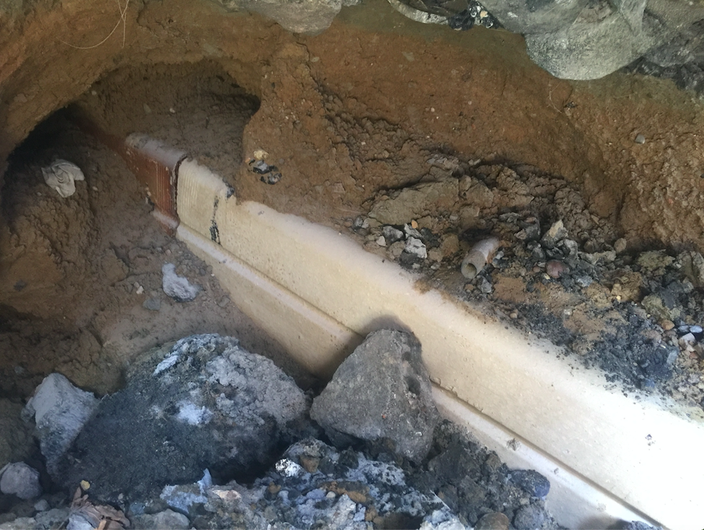 A sheared water line from city main to a home.

Though the neighbors claim they were told they bear the financial burden of repairs, a spokesman told PhillyVoice that the Water Department is “working with the customer(s) that have experienced a loss of their water service following a street repaving operation.”

“Although it is often the case that a repaving operation exposes defects in property services, we will work with the Streets Department to determine if this was the case,” said John DiGiulio, community relations manager for the Water Department. “At this time, no determination has been made on responsibility.

“PWD will provide a thorough inspection of the sewer and laterals in this area to determine if there may have been an undetected defect that resulted in this cave-in and subsequent loss of water.”

That inspection was done on Friday, and the Water Department vowed to share the results with property owners, as well as taking “the next steps to get them back into water service as soon as possible,” according to DiGiulio.

The Johnsons already paid to have their city water flow again, leaving Hammond and Stimmell the lone residents without water service, refusing to pay for repairs estimated at $4,600 to $7,000.

"Oh, they're gonna fight you. They always fight you about the reimbursements," one of the private plumbers told the couple on Friday afternoon. "They could say that the lateral main is defective, but (the falling concrete) obviously sheared that line. It's gonna be a hard battle for you guys. I've been doing this for 30 years."

It's a battle that Hammond is clearly ready to fight.

"It's like the MOVE situation. They targeted one property, but there was so much collateral damage," he said. "We're the collateral damage from the repaving project damaging our water lines. But for the city's negligence, our water would not be out."