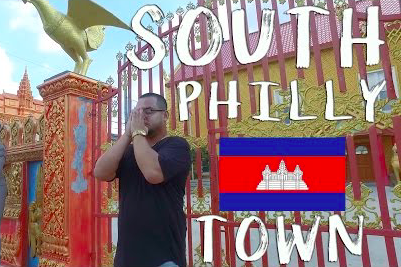 The witty creators of a music video parodying Drake's "Controlla" in South Philadelphia's Cambodian district are either seriously joking or joking seriously.

"I made it a basic love song about taking out your girl to get food," Duong said. "I didn't think it would get this much traction."

He might have guessed. Online and in venues around the United States, Hella Chluy has gradually built himself a name as an authentic voice for the distinct humor of America's Southeast Asian communities (See: "Sh*t Cambodian Folks Say"). Born in a Thai refugee camp in 1983, he moved to Seattle with his family the following year and grew up in a culture that often wound up stereotyped, misunderstood and casually lumped in with Chinese, Japanese and Korean communities

Duong's attraction to Philadelphia comes from its status as home to the fourth-largest Cambodian-American community in the country — about 13,000 people including Camden and Wilmington, according to 2010 U.S. Census data.

"I've always had that love for Philly," Duong said. "It feels so homely in Cambodia Town. They have all the authentic food we can't get where I live. I was hoping the video could paint an uplifting picture of the community. 'Controlla' just happens to be my favorite song of the summer."

Duong says Cambodia Town — in reality, that's what it is — but for now the name remains an informal distinction for a stretch that runs from about 6th and Morris streets down to Oregon Avenue and across to 8th Street. The core is most heavily concentrated from about Snyder to Porter Streets, a fairly unique density compared to Cambodian Towns in other American cities.

Cambodian settlement in South Philadelphia directly dates to the fallout of the Vietnam War, coinciding with the aftermath of Khmer Rouge's rule from 1975-1979.

"About 2.5 million Cambodians were slaughtered during the regime's genocide campaign," said K. Naroen Chhin, who serves as a member of the Philadelphia Cambodian Town Board. "It was essentially forced migration and the system in place in the U.S. — local, state and federal — was not ready for us."

Apart from a severe language barrier, Chhin explained that many families suffered from post-traumatic stress disorder.

"It put our communities at a loss," said Chhin, who was also born in a refugee camp. "As drugs and gangs became more prevalent in the nineties, it led to the school-to-prison-to-deportation pipeline. Not to say that those negative associations don't exist for any reason, but you have to look at the context of a failed system that didn't allocate resources to these families."

Reframing that legacy is a clear priority for Duong and his manager, Derek Pan, who not long ago founded his own diaspora news outlet, Khmerican, to provide a pro-community source for Cambodian-Americans.

"We do human-based stories that provide balance without sweeping anything under the rug," Pan said. "In major outlets, coverage of Cambodians, Laotians and Vietnamese tends to be all about violence, gangs and drugs. But we have representation in a lot of cities and there's something untapped."

Pan points to the many artists and entrepreneurs who are challenging misconceptions about the Cambodian-American community. Movements for official "Cambodian Town" recognition have come to fruition in places like Long Beach, California, and Lowell, Massachusetts. There are also solid communities in Seattle, Atlanta and Providence.

"It says a lot about where we are as a community. You look at Chinese and Japanese communities that have been here for 100, 150 year — albeit under different circumstances — and then you get a sense of our progress."

Philadelphia, Pan said, is a consistent source of great stories. He recalls a block party event this year when celebrants hung a "Welcome to Cambodia Town" without the city's approval. They couldn't leave it up there.

"It illustrates how hungry the community is to get the town recognized."

Where do things stand in the movement to officially designate Cambodia Town as a cultural corridor? Back in June, Chhin says Philadelphia's Director of Commerce, Harold Epps, was joined by City Councilwoman Helen Gym for a walking tour of more than 40 Cambodian-American-owned businesses in the neighborhood. Mayor Kenney, meanwhile, last week raised the flag of Indonesia at City Hall, soon to be followed by the flag of Ukraine.

"Mayor Kenney was always supportive of our community as a member of City Council," Chhin added. "He's been a major proponent of making Philadelphia a more immigrant-friendly city. Cambodia Town has not been officialized, but it can't be official until we recognize it in our hearts and minds, and when we keep the streets clean and safe."

"They are socially minded artists and producers," said Chhin, who also works for the Cambodian-American community's grassroots 1Love Movement in Philadelphia. "I think the video ultimately highlights our resilience. Despite what people say about South Philly, Southeast Asians and Cambodians, this our reality and our lived experience. This is what we're doing. We stayed in the neighborhood and our businesses contribute back to the community. We're taking the lead."

When coupled with the community's history over 40-plus years, the energy today is obvious in both the people and the place, Pan said.

"I used to the visit the Philly area all the time," Pan said. "I don't remember seeing it so nice, clean and presentable. It's an important part of our culture here. There are more than 140 Cambodian temples in the United States, but the [Preah Buddha Rangsey Temple at 2400 S. 6th Street] likely has the biggest mural painting of Buddha in the entire country."

Jeff Lek (aka Planetary P.,) an artist-turned-film producer and also a Cambodian refugee, said he and Hella Chluy went for something funny and quirky with the Drake parody.

"Our plan was just to go there and wing it," said Lek, who suggested filming in Philly after producing a "litmus test" video for April's New Years block party. "I wanted to show what was poppin' and what was beautiful about this community. It has a nice nucleus, it has the culture and people. We just need to wake up, keep the culture alive and take pride in our community."

He and Duong, who became friends via YouTube, believe that what they're doing is a necessary bridge to activism and cultural awareness among Cambodian-American Millennials. The recent formation of the Young Friends of Philadelphia Cambodian Town speaks to this mission. Artists and community members now have an open forum to discuss social issues covering everything from schools and neighborhoods to social services.

"Once we get it recognized by the city, people from all over will want to visit Cambodian Town here to try Southeast Asian and Cambodian food," Lek said. "We need to hold onto it."

For Hella Chluy, "Cambodian Town" is another surge in recognition as he continues his move toward more mainstream comedic work. Right now, he also works in real estate in Brooklyn. He recognizes that his videos, while silly, serve an important purpose in the exchange of cultural understanding.

"We have a hard history," Duong said. "There's still a gang mentality from the '90s. I stay away from all that. My parents didn't bring me here to return to violence. My work is not done yet before I cross into general comedy."

Cchin sees the video as a both a beacon and a testament to forebears like Sarorng Sorn and Hor Em Chou, the longtime executive director and president tandem at the Cambodian Association of Greater Philadelphia (CAGP), which focuses on advocacy and direct service.

"They were all about inclusiveness, equality, women's rights," Chhin said. "That video touches on what it would mean to make this Cambodian Town a gem that should be cultivated. Gentrification can kill communities softly by pushing people out slowly. For us, it's a very collective, holistic effort. We want to keep it vibrant here."

As for the reception to the video, Duong and Lek said they got what they expected.

"All the locals are pointing out Khmer Kitchen and Boba & Co., saying they love to eat there," Duong said. "Other people are shocked that we somehow made South Philly look like Florida. You need visuals these days, so I bring it out. MP3's don't do it in 2016."

Where the movement to officialize Cambodia Town goes from here will depend on the receptiveness of the Kenney Administration and City Council to explore the possibility of a resolution. Hella Chluy's message, meanwhile, will likely make its way to a young generation of Cambodians interested in the what comedian-rapper with broken Khmer has to show for the American experience.

"People catch on about a year later," said Lek. "I was in Phnom Penh in June and my little cousins all knew about Hella Chluy's videos."

To get things done these days, to draw a new generation into a vital community cause, you sometimes have to take control of the situation with a Drake parody.

"It all goes hand in hand," said Pan.