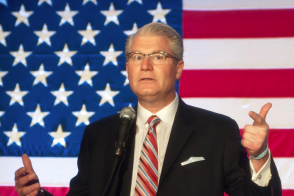 John Dougherty is the business manager of IBEW Local 98.

A spokesman for John Dougherty reacted Tuesday morning to an account in the Philadelphia Inquirer of an altercation last month with a non-union contractor in South Philadelphia.

Dougherty, the business manager of Electricians Local 98 and the Philadelphia Building and Construction Trades Council, allegedly struck a non-union electrician in the face at a worksite, an incident that Philadelphia police on Tuesday confirmed is under investigation. The contractor, Joshua Keesee, told the newspaper that Dougherty swung first and broke his nose with one punch.

But Frank Keel, spokesman for Dougherty, said the union leader acted in self defense and questioned the newspaper's motives in reporting the story.

"The Inquirer's artificial urgency to report this minor incident has more to do with John Dougherty's recent court victory over the paper than it does with responsible journalism," Keel said in a statement.

Dougherty was not the aggressor, Keel said.

"John, while on his way to work in full business attire, was involved in a brief, physical altercation with a contractor at a notorious, non-union job site in South Philadelphia in front of multiple witnesses. John was not the aggressor," the statement read. "‎A non-union contractor on-site, who was half John's age, made verbal threats in front of John, saying he knew where John's wife took her daily walk and the location of John's daughter's home.

"John told the contractor that if he had a problem, he should deal with John alone. At that, the contractor rushed John and threw a punch at his head," the release continued. "This happened after the contractor had already sucker-punched one of the Local 98 picketers on the site, which required stitches for the Local 98 member. John Dougherty ducked the contractor's punch and countered with a punch to the assailant's face. That was the end of the incident.

"We firmly believe that there should be no criminal charges filed in this matter, as John Dougherty acted purely in self-defense."