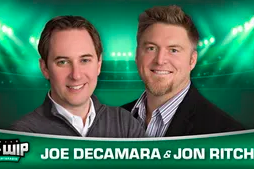 Joe DeCamara didn't make it to the SportsRadio 94WIP studio in Philadelphia on time on Wednesday. His boss, program director Spike Eskin, took his seat and let the world know that DeCamara overslept.

Showing up late for work because you overslept usually entails taking a disheveled walk of shame. Some don't make it out with their jobs. Those who do spend the whole work day with a pit in their stomach and the self-loathing belief that here it is — proof they have failed irrevocably as an adult.

For SportsRadio 94WIP midday host Joe DeCamara, the punishment for missing the beginning of his 10 a.m. show was getting mercilessly dragged by station program director Spike Eskin, who put out a "statement" on Twitter that warranted a double take. These days, your mind could be forgiven for guessing DeCamara must have applauded the attempt to overthrow American democracy or something.

Wednesday's show began with Eskin grinning through the airwaves, gleefully announcing that he was temporarily filling in for DeCamara alongside co-host Jon Ritchie.

"Joe is fine, but we didn't know this about him for sure until about an hour ago," Eskin said.

Ritchie and producer James Seltzer feared that DeCamara may be have been deceased.

"I was sick-to-my-stomach concerned, if we're being honest," Seltzer said.

"It was real," Ritchie said.

Through back channels described on the broadcast, Ritchie helped arrange for DeCamara to be woken up by a maintenance worker at his residence. DeCamera joined the broadcast several minutes after 10 a.m., explaining that his phone went through an update overnight and his alarms didn't go off as expected.

"I feel like a world-class dufus right now," said DeCamara, who joined the station in 2016 after working for rival 97.5 The Fanatic.

Eskin added that DeCamara had been late once before because of traffic, despite living two miles from the station, and Ritchie was once late because he fell asleep on a train from Harrisburg and wound up in Trenton. These are the men who know what must be done to fix the Eagles, to hear them tell it every day.

DeCamara doesn't appear to be facing any legitimate discipline, but Eskin has delegated official punishment authority to Ritchie and Seltzer, who will surely find a way to make DeCamara die a little on the inside.

To be fair, the coronavirus pandemic has employees from many industries working from home these days. Whenever life transitions back to the office, DeCamara will get the last laugh as maladjusted listeners sweat bullets in their cars, an hour late for work, as he talks about whichever player the Eagles most recently neglected to draft.