Stop calling the cops on spotted lanternflies ... and more from this week in Philly Twitter 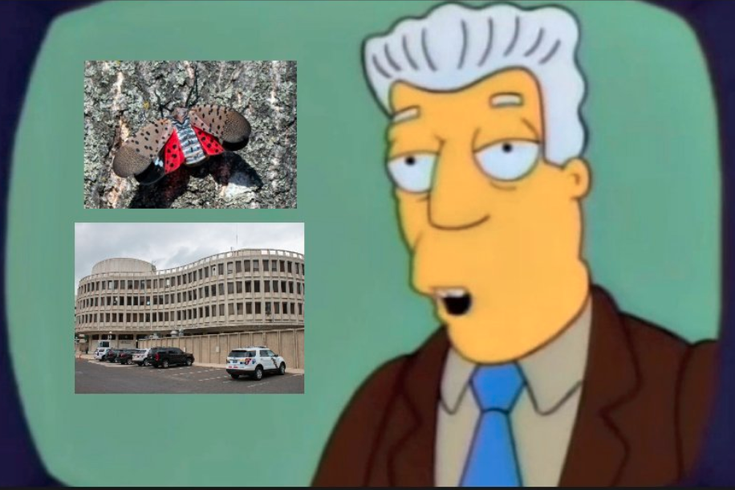 Philadelphia Police took to social media this week to give an important PSA: No, you can't call 911 on spotted lanternflies.

"Please do NOT call 911 to report #SpottedLanternfly sightings. While they are a nuisance, they are not a police issue," PPD tweeted from its official account Thursday morning.

RELATED: Giant swarm of dragonflies spotted on radar over Pennsylvania

It's true that the invasive insects have made their way to Philadelphia and begun a takeover. While it's important that if you see one, you should squish it immediately, you can't actually call the cops on them. You can report them to Department of Agriculture.

Please do NOT call 911 to report #SpottedLanternfly sightings. While they are a nuisance, they are not a police issue. And on that note, we, for one, would like to welcome our new insect overlords. Maybe they would like to build some nests on our vast concrete headquarters? pic.twitter.com/PXmCs4db0f

So, because Philly Twitter is a magical place and because it's almost Friday, we've decided to put together a compilation of local tweets from this last week. Enjoy.

View of Philadelphia from One Liberty Observation Deck pic.twitter.com/CrBoTwn2G7

First, let's just get this out of the way: Welcome Henri The Goat – "Philly's favorite goat 🐐 " – to your timelines. You can follow him on Twitter and on Instagram. You're welcome.

In other news, comedian John Mulaney was apparently in Philadelphia at The Met last night for Kacey Musgraves' stop on her world tour. Read: I missed John Mulaney and Kacey Musgraves in Philly all in one night. So that's fine, I'm completely OK with that, I'm not upset.

In Philadelphia @KaceyMusgraves
This was a very very very good time pic.twitter.com/MOSPHJ2Dwb

There were dispatches from the newly-reopened iconic Melrose Diner, which was closed due to a massive fire in July. You can read more about the fire that happened in July here.

The @PhilaMummersSBA playing at newly reopened Melrose Diner. The diner was closed for 6 weeks after a fire @CBSPhilly pic.twitter.com/jJ5E0TiUgD

Only a guess but by my count 112% of South Philly residents were here this morning to welcome back the Melrose Diner pic.twitter.com/OBETBbV3nr

Triple Bottom Brewing Co., the company two years in the making that's hiring people who have traditionally faced barriers to employment, opens Thursday. It's at 915 Spring Garden St. Here's more on it's mission, via the Philadelphia Citizen.

Today is the day! See you at Triple Bottom at 4! ❤️ pic.twitter.com/WJsQgbSLOn

Congrats to Triple Bottom Brewing (@TripleBottomCo) on your grand opening! We appreciate our partnership with you #creatingjobs #communityengagement pic.twitter.com/E0tHR4pLSu

Former Pennsylvania Gov. Ed Rendell wrote an op-ed in the Washington Post calling Elizabeth Warren a hypocrite and effectively declared his loyalty to Joe Biden. In summary, the op-ed claims Warren has lied about not using big-ticket donors and being anti-establishment.

Here are some Philly reactions to the former governor's piece.

I keep seeing "this oped is really a low point for Ed Rendell" but idk I gotta say LITERALLY BOMBING A PHILLY NEIGHBORHOOD has gotta be lower.

I covered Ed Rendell through all his roles in Philly & PA politics. He made a lot of d*** moves over the years. But to prop up your weak candidate by targeting the rising woman who threatens his coronation on the eve of the debate is REALLY low. Shame on WaPo for enabling this. https://t.co/Kcb6MyELRs

As a Pennsylvanian, I'm embarrassed by Ed Rendell's dirtbag move. Not his first. In response, I'm making another donation to @ewarren.

FWIW, back in May we wrote about Warren taking donations from big money Biden supporters in 2018 and then ripping those same donors now:https://t.co/WwseISWn68

On Wednesday, we remembered the September 11, 2001, terrorist attacks on the U.S., and Philadelphians gave many tributes to memorialize the lost and fallen.

Before tonight’s game, we honored first responders from September 11, 2001. We will #NeverForget. 🇺🇸 pic.twitter.com/CFqCRuJXGK

Good morning Philadelphia. Today we remember the many friends, family, and loved ones we lost on September 11, 2001. #Honor911 pic.twitter.com/dAwz0FFsDR

18 years later, looking back on a long walk I took with @JimMacMillan (who took made these photographs.)https://t.co/8JMYxsshpF pic.twitter.com/QVOaU9Senj