Giant swarm of dragonflies spotted on radar over Pennsylvania 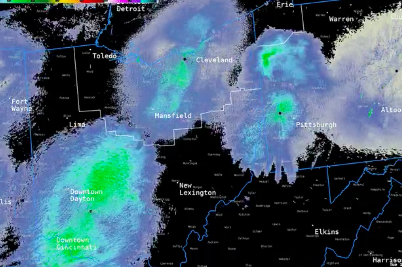 Radar of Indiana, Ohio, West Virginia and Pennsylvania showed a large formation this week that wasn't rain. Meteorologists and residents in these states determined the radar likely picked up a large swarm of dragonflies.

As Philadelphia begins to combat the arrival of the invasive spotted lanternfly, another insect potentially could be migrating our way in massive numbers this week.

Meteorologists with the National Weather Service in Cleveland spotted an unusually large blob on their radar earlier this week, except it wasn't precipitation.

This is not rain being observed by the radars across IN/OH/PA today. Care to take a guess as to what is traversing the region? pic.twitter.com/yRbgPfHBuN

While we are not biological experts, we have determined (through input from our followers) that it's most likely dragonflies mixed with other insects/birds! https://t.co/5MeJXj37zq

Readers from Indiana, Ohio, Virginia and Western Pennsylvania reported large numbers of dragonflies in the area.

Around 6:30 pm in Southern Ohio pic.twitter.com/lenWiSgMUP

I saw them flying around my house in Gore VA yesterday after a brief thunderstorm. It was amazing to watch. pic.twitter.com/P84M5xLDxb

The deepest shades on the radar appeared over Indiana and parts of Ohio on Tuesday, but a smaller formation stretched as far east as Altoona, Pennsylvania. And it was moving east.

RELATED: Stop calling the cops on spotted lanternflies ... and more from this week in Philly Twitter

Jonathan O'Brien, a meteorologist with the National Weather Service office in Mount Holly told PhillyVoice on Thursday that it's not uncommon for radar to pick up biological matter. The Mount Holly station has posted in the past about birds, which are often seen on radar as they travel during the early morning hours.

A similar phenomenon occurred earlier this year when a massive bloom of ladybugs was detected by radar in the area of San Diego.

The large echo showing up on SoCal radar this evening is not precipitation, but actually a cloud of lady bugs termed a "bloom" #CAwx pic.twitter.com/1C0rt0in6z

As for the dragonflies, O'Brien doesn't believe the swarm will make it as far east as Philadelphia. He was unaware of a radar pattern showing the dragonflies and other insects in Eastern Pennsylvania or New Jersey.

"It's pretty unlikely," he said. "It seems unlikely they would have traveled as far as Philadelphia. We often do see insects and birds on our radar. It's one of the interesting things about the technology we have."

Philadelphia has plenty on its hands with the spotted lanternflies. The city probably doesn't need additional company. Just don't look to the Philadelphia Police Department for help in getting rid of the infestation.

Please do NOT call 911 to report #SpottedLanternfly sightings. While they are a nuisance, they are not a police issue. And on that note, we, for one, would like to welcome our new insect overlords. Maybe they would like to build some nests on our vast concrete headquarters? pic.twitter.com/PXmCs4db0f