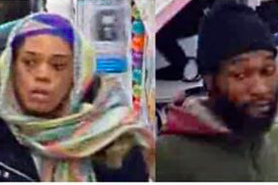 Two suspects are wanted in an attempted theft that allegedly occurred at a Target in Springfield Township, Delaware County. Police said the male suspect threw an infant in a baby seat while evading the store's security.

Springfield Township authorities are searching for a man and woman who allegedly used an infant as a distraction while attempting to steal baby formula from a local Target store.

Investigators said the incident occurred Dec. 10 at the Target located at 1200 Baltimore Pike in Delaware County.

Inside the store, the man allegedly was observed placing multiple cans of baby formula inside a backpack he was carrying.

The woman was holding a young child inside the store and the man was also holding a baby seat.

When the store's security staff confronted the two suspects as they tried to leave the store, the woman fled on foot. The man, who by then had the baby inside the seat, allegedly threw the seat at the security staff member with the infant inside, fleeing on foot.

Police tended to the infant and called 911 before the woman returned to the store to take custody of the child. The woman fled again, this time with the child, before police arrived at the scene.

Anyone with information on this incident or the suspects is asked to contact Springfield Township police at (610) 544-1100.