The incident involves students at the U.S. Military and U.S. Naval academies who appeared in the background during ESPN's 'College GameDay' live broadcast 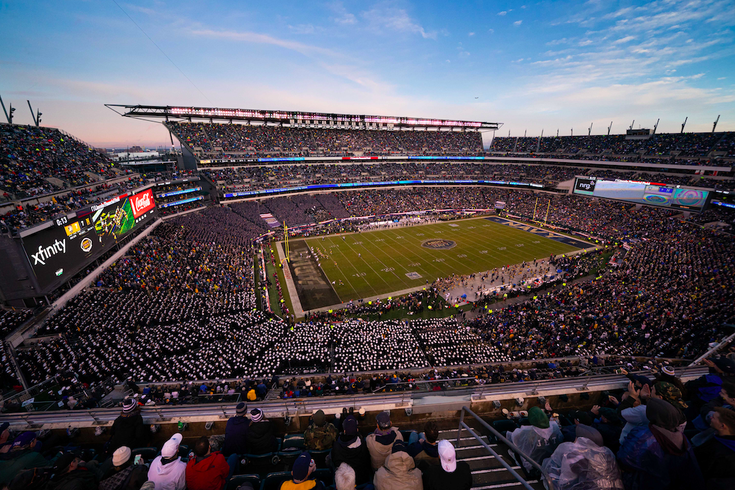 The annual Army-Navy game was held in Philadelphia at Lincoln Financial Field on Dec. 14, 2019. Several students are under investigation for possibly flashing a white supremacist gesture during the pregame ceremony.

Saturday's Army-Navy game was a blowout for the Midshipmen, who cruised to a 31-7 victory over the Black Knights at Lincoln Financial Field. But there is a shadow hanging over the game's pregame TV broadcast, which appears to have shown students flashing a hand gesture commonly associated with white supremacists, according to the Washington Post.

The incident under investigation involves two U.S. Military Academy cadets and a U.S. Naval Academy midshipman who were positioned behind ESPN's Rece Davis during the pregame ceremony shown on "College GameDay."

CADETS UNDER INVESTIGATION: West Point and the Naval Academy are looking into hand signs - often associated with “white power” - flashed by students during a televised report at the Army-Navy football game. @TrevorLAult reports. https://t.co/j9BGZLfQxQ pic.twitter.com/33XSR3E6X6

As seen in the video above, at least one cadet can be seen flashing a symbol that has become associated with "white power."

While the symbol is traditionally used to signal "okay" — and often after NBA players hit three-pointers — the Anti-Defamation League officially classified it as a hate symbol in September. When the gesture is flipped to position the circle downward, it is interpreted as a "W" and a "P" for white power.

Use of this symbol notably gained notoriety this past spring when former Philadelphia Phillie and current Chicago Cubs broadcaster Doug Glanville was targeted with the gesture by a fan. The Cubs organization investigated the incident and banned the fan for life.

The ADL notes on its website that the gesture is still frequently used in the traditional sense of "okay" and continues to urge caution before jumping to conclusions about intent.

U.S. Military Academy superintendent Lt. Gen. Darryl Williams told the Post an investigating officer has been appointed to conduct an investigation into the incident in Philadelphia.

The identities of the cadets and midshipman in Saturday's incident were not revealed. It's unclear what type of discipline they might face if the gestures are deemed to have been used with ill will.