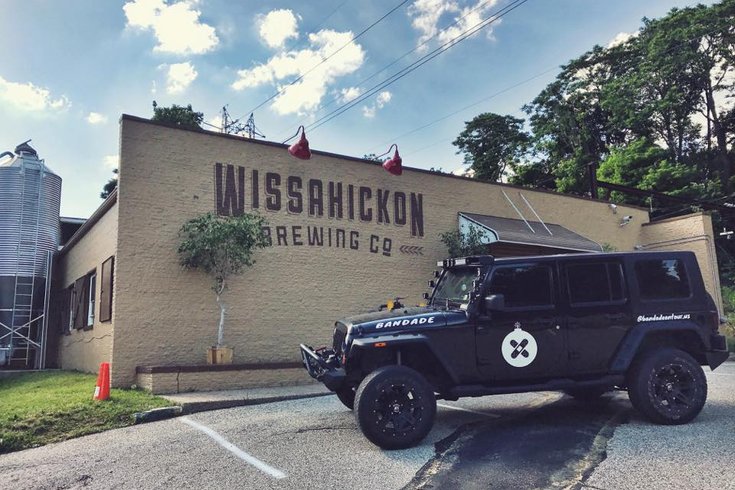 The BANDADE Jeep Wrangler, outside Wissahickon Brewing in East Falls.

In between leaving Philadelphia after her graduation from St. Joseph’s University in 2012 to returning to the city in 2016, a lot of things changed for BANDADE founder Caitlyn Grabenstein.

The catalyst for much of it was the death of a close friend after battling Leukemia. Her friend, who also attended St. Joe’s and was treated at the Children’s Hospital of Philadelphia, passed in 2013.

Before her friend died, though, Grabenstein reached out on a whim to the manager of singer-songwriter Ingrid Michaelson, of whom both she and her friend were big fans.

When Michaelson surprisingly responded with an autographed T-shirt and personalized note, it set the groundwork for Grabenstein’s future full-time endeavor of BANDADE, a charitable business that taps popular musicians to help raise money to aid in the fight against cancer.

Since then, artists in the BANDADE family have included Iron & Wine, Andrew Bird, Florence Welch, the Goo Goo Dolls, Ben Kweller, and many others.

Grabenstein worked for Broadcasting Music, Inc. in Nashville, before returning to Philly and committing to running her business here. After a series of shows featuring artists at local music venues like Milkboy and Bourbon & Branch, BANDADE kicked off an East Coast summer tour in June, bookending it with shows at Wissahickon Brewing in East Falls.

“I was basically doing these shows as a hobby, once a month or so, for the last couple years,” Grabenstein said in an email. “Then in June I decided to really take the leap and do it all the time – that’s where the tour idea came from. It’s essentially a moving festival, because it’s different artists in each city.”

In designing the 14-stop brewery tour, Grabenstein received support from several Philly-based businesses to act as sponsors, including La Colombe, United by Blue, Maaco, and others.

The final stop of the tour will be this Friday, headlined by Nashville-based singer Nikki Lane.

Throughout the tour, Grabenstein and her team have driven and camped out in their BANDADE Jeep Wrangler and recorded a podcast documenting their travels called Reel Adventures.

For more on Friday’s concert, visit the Facebook event here.