BROOKLYN -- After the 400th win of his career, Phil Martelli was the exact same guy from the first 399. Asked about his gameplan to defend the three-point line against George Washington, Martelli quickly cut the question off.

“Well, in the first half we decided not to guard it,” he said matter-of-factly.

Hyperbole, yes, but there was a lot of truth behind Martelli’s answer. GW raced out to a 49-35 halftime lead behind 11-16 three-point shooting, and from a St. Joe’s standpoint, most worrisome was how easily the Colonials executed their offense.

The first question that naturally comes up is, “How do you mentally handle an opponent lighting you up?” According to the Hawks, there was no panic.

Part of GW’s early offensive onslaught was due to the strategy employed by the Hawks. 6’10” center Kevin Larsen received a ton of attention from the St. Joe’s defense. When he caught the ball down low, Larsen always saw additional bodies.

The idea made some sense. Per Ken Pomeroy, GW only gets 26.7 percent of its points from deep. Additionally, Larsen and 6’9” forward Tyler Cavanaugh are two of their three leading scorers. The problem is that Larsen was more than up to the task, and he made Martelli’s team pay in a major way. He collected seven assists in the first half, six of which went for three-pointers. 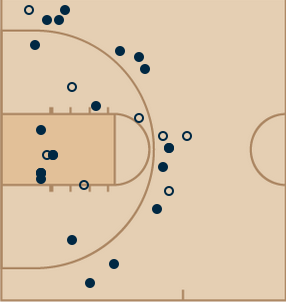 “We play the numbers, and I don’t mean that in an illegal South Philadelphia kind of way,” Martelli said. “And the numbers would indicate to you that Larsen and Cavanaugh are their horses.”

As Martelli correctly pointed out after the game, GW deserves credit for the way they moved the ball against his team’s post defense. They obliterated St. Joe’s in the first half.

“Those flurries felt like a street fight,” Martelli said. “And if you have ever been in a street fight, you don’t know where the punches are coming from and you’re just trying to cover up.”

Out of the locker room, St. Joe's changed some things up. Miles gives up three inches and about 50 pounds to Larsen, but he acquitted himself fine defending one-on-one. St. Joe’s also mixed in a zone defense, which Martelli and the players credited assistant coach Mark Bass for.

And as much as the game plan mattered, the Hawks also needed their opponents to come back to Earth. “Hope they miss a shot,” as Bembry put it.

GW went 4-15 from three in the second half, and the Hawks are moving on because of it.

It’s impossible to know exactly what the NCAA Tournament committee is thinking, but Martelli knows someone who specializes in that sort of thing if he wanted an idea. The thing is, he doesn’t.

“I have [Joe] Lunardi right across campus,” Martelli said of the school’s radio broadcaster who doubles as a bracketologist for ESPN. “If he was to come in here right now, hand on the bible, I have not said a word to him [about the tournament].”

His players know what is going on, though. In 2016, it’s impossible to keep that kind of info from college kids. And from the sound of things, they’re reading Big Five Bracketology (OK, probably not).

Lunardi had the Hawks as one of the last four teams receiving a bye entering today, but a loss today would have their third consecutive defeat to end the season. Losing to a conference opponent on the bubble wouldn’t have helped their case, and getting run out of the gym doesn't do wonders from the standpoint of the pesky ol’ eye test. The Hawks hadn’t really looked like an NCAA Tournament team for over a week.

So yeah, that second half was kind of important.

No. 1 Dayton cruised past Richmond in the session’s first game, but the Flyers don’t come into the semifinal as overwhelming favorites. St. Joe’s won the team’s only matchup of the year by a 79-70 margin on Hawk Hill, which is part of the reason that Saturday's game feels more like a toss-up.