St. Joe's Prep advances to another state final after knocking off Garnet Valley in 6A semis 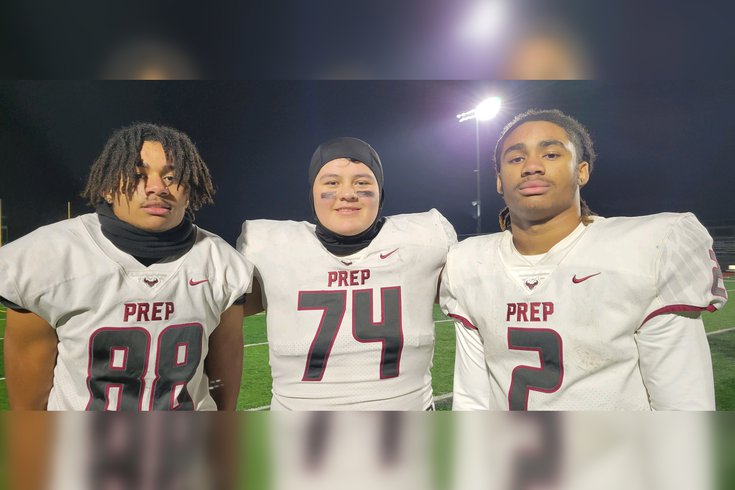 Back in early October, Samaj Jones kicked the Franklin Field turf, put his head down and wiped the tears from his eyes. St. Joseph’s Prep lost to Catholic League archrival La Salle for the first time since 2015 and the Hawks’ sophomore quarterback blamed himself.

Saturday night at Ridley’s Phil Marion Field, not enough people could pat him on the back.

Jones scored four touchdowns and threw for three more in leading St. Joe’s Prep to a thorough 49-13 win over previously undefeated Garnet Valley in the PIAA Class 6A state semifinals.

The three-time defending state champion Hawks (11-2) will play District 7 champion Mt. Lebanon (14-0), 49-28 winners over State College, next Saturday at 6 p.m. at Hershey Park Stadium for the chance to four-peat as Class 6A state champions.

This is St. Joe Prep’s eighth trip to the state finals in the last nine years. The Hawks, ranked No. 1 by PhillyVoice,  could become the first four-time state champion at the 6A level since Pennsylvania moved to the 6A level in 2016. In fact, The Prep has appeared in each 6A state championship game since the 6A system has been implemented.

Jones made it possible.

He’s faced down adversity all season, and he could not have shined on a bigger stage so far than against senior-laden Garnet Valley (14-1), which was playing for their legendary coach, Mike Ricci, who announced his retirement after 35 years as head coach of the Jaguars.

“With a lot of stuff off the field, with me and injuries, our team didn’t miss a beat and I couldn’t let these guys down,” said Jones, who completed 10 of 14 passes for 145 yards, including touchdown passes of  7, 30 and 16 yards, while rushing for 83 yards on eight carries. “That’s the great thing I loved to see. I knew when I got in, we could be more explosive.

“I loved being doubted. I knew it didn’t come from my coaching staff or my team, it came from the outside noise. No one thought we would score more than 10 points (against Garnet Valley). It’s the best thing. I listened to the doubt with one ear and let it out the other.”

The Hawks bolted out to a 21-0 lead before Garnet Valley could get on the board. The turning point came early in the second quarter when St. Joe’s Prep freshman safety Anthony Sacca, the son of former Penn State quarterback Tony Sacca, intercepted a pass at the 50 and returned it to the Garnet Valley 5-yard line. One play later, Jones scored to put the Hawks up 14-0.

By halftime, St. Joe’s Prep led 35-7, holding the Jags’ potent offense to 136 yards of total offense—50 coming on the ground. Prep, meanwhile, had 209 yards of offense.

Jones completed his last six passes, including a 30-yard score to sophomore Brandon Rehmann and 16-yard scoring pass to another sophomore, Elijah Jones, late in the third quarter.

“Losing to La Salle and Milton (Ga.) were real wake-up calls for us earlier this year, because a lot of guys on this team never lost before,” Hawks’ junior center Julian Cervantes said. “We really matured over the season and we had our best week of practice this past week. We didn’t play our best football. We can still play better.”

This was supposed to be a “bridge season” for St. Joe’s Prep, which never really rebuilds. But its youth, with a starting lineup offensively and defensively dotted with juniors, sophomores and freshmen, suggested another trip to the state finals may have been a year away.

Garnet Valley is a team that had seniors everywhere. The Jaguars had run over everyone they faced—and they did at times when weren’t even playing at their best. It’s how dominant they were, until Saturday night.

“I have loved every moment of this season and I just told our guys the true measure of any team is when you get the most out of the ability level that you have,” Ricci said. “This team certainly got the most out of the ability level it had. The senior leadership has been spectacular. I told our guys that we’re going to choose to celebrate the awesome season that we had and focus on that. We’re going walk out of here with our heads held up high.

“It was an uphill climb right from the beginning. They’re so explosive and they made plays that were top level. The better team won today. My emotions right now are for the kids on this team and how they invested so much of themselves into becoming the best team that they could.

“If we’re talking in terms of this being my last year, to have that kind of effort, and that kind of cohesiveness, that kind of brotherhood and love shared, I couldn’t ask for anything more.”