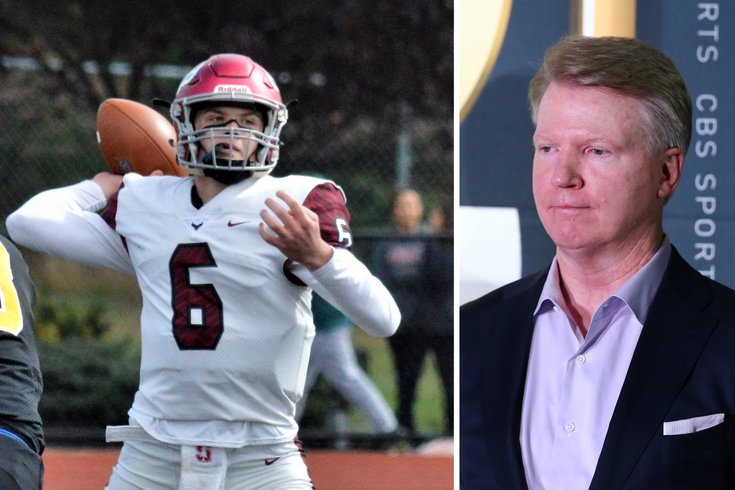 Derek McCord was an anomaly. He was a teenager raised in Long Island, New York, and was a devout Denver Broncos fan. Even today, McCord can reel off the date as if recalling a tragic family moment: January 25, 1987. The McCord home was filled that day with Giants fans — except for one, Derek —watching Big Blue and Phil Simms squash McCord’s Broncos and his hero, John Elway, in Super Bowl XXI.

By the beginning of the fourth quarter, the McCord home was empty, save for Derek, who was in his bedroom crying like a baby and mad at the world over the Broncos’ demise.

Kyle was already very good before meeting Super Bowl XXI MVP Phil Simms. What the former Giant great has done is make Kyle that much better. During a handful of times last summer, Simms worked individually with Kyle on his footwork, release angle, throwing on the run and how he sees the field.

In Prep’s season-opening 21-17 loss at Marietta (Ga.), Kyle rolled left and threw across his body to hit Malik Cooper in the back of the end zone in the second quarter for a 29-yard touchdown pass for the Hawks’ first score of the season.

“That throw doesn’t happen without Phil,” Derek said. “I rave about Phil all of the time, because you won’t come across a nicer, more down-to-earth guy than Phil. I love the guy. I wish Kyle and I met Phil five years ago. One thing Phil really worked with Kyle on was throwing on the run, and throwing while running to his left. It’s why I say Kyle doesn’t make his first touchdown throw this season against Marietta without Phil.”

It was Simms, who still holds Super Bowl records for highest completion percentage (22 of 25 for 88%) and highest passer rating (150.92) when he was named MVP of Super Bowl XXI, that reached out to Derek about helping Kyle.

“I called Derek,” said Simms, Showtime’s “Inside the NFL” and CBS “NFL Today” studio analyst. “My son Matthew and I heard about Kyle, and I knew Derek played at Rutgers, and I wanted to call him. There was a curiosity, and I wanted to train Kyle. I’ve been doing this locally for about 23, 24 years.

“More recently, we’ve branched out. When I heard about Kyle, I wanted to see him throw. That’s how it started. I love doing it. There’s nothing like working with kids, but I have to give my son Matthew a lot of credit. There’s nothing like getting that look you get from a kid when he succeeds. I spend almost my offseason doing this with Matt.”

"Kyle throws the ball where he wants it to go. I couldn’t believe he was a sophomore when I first met him. Kyle spins the ball really well." — Phil Simms

“Kyle is truly a great student, and a good kid. It’s fun to work with kids who have talent, because you say, ‘Do this,’ and five minutes later, they’re doing it,” Phil said. “Kyle throws the ball where he wants it to go. I couldn’t believe he was a sophomore when I first met him. Kyle spins the ball really well.

“Kyle loves to work. We stay on the field an hour-and-a-half, and I’ll go low and say he’ll throw 200 passes. You’ll never hear him say ‘I’m tired.’ You love working with kids who love to work. And Kyle listens to everything. That tells you a lot, too. He can handle a big workload. You become a better passer by doing what, throwing.”

Simms says they haven’t broken down film yet, but it’s coming. Simms stressed he wants to do more advanced teaching this coming off-season, especially when it comes to recognizing defenses. Simms keeps it basic: Throw, train and learn more about football.

The sessions have been incredibly helpful to Kyle. They’ve also been helpful to Simms.

As Chris was staring at Ramapo High School, and Matt at Don Bosco Prep, Phil stood aside. He didn’t want to be the overbearing father. If they wanted advice, he would be there. This is like a second chance Phil has with young players like his sons.

“I’ll also say this: Kyle was going to become a very good quarterback without me or Matt. We’re just trying to help him a little more. Working with kids like Kyle also helps us. We run camps for kids and there is money involved with college kids and high-caliber high school kids. It’s why I say, ‘Thank you.’ They’re helping us move forward in what we’re trying to do.”

When Kyle first heard that Phil Simms was interested in working out with him after last season, Kyle was curious, too. Kyle just got back from school one day and his dad asked if he wanted to go work out with Phil.

“Being from South Jersey, I had an idea who Phil is, but I didn’t realize until I looked up and that he won the Super Bowl and was the MVP," Kyle said. “He’s a great guy. He pushes me. When I first met him, it was pretty cool. We worked out for a few hours.

“He introduced me to a lot of new techniques; stuff I really wouldn’t think of doing. Phil had me dropping like a lefty, even though I’m a righty, and flipping my hips and rolling out to my right and throwing across my body to the left. I’ve definitely benefitted from it.”

“Phil isn’t in it for the money or attention, he’s someone who genuinely cares. That kind of commitment you never forget. I wish there were more people around like Phil Simms." — Kyle McCord

Kyle’s worked out with Phil and Matt about 15 times. He carries “Step, turn, throw” in his sleep.

“What told me how dedicated Phil is came last summer. It is nice to know that you have an extra set of eyes on you. What made me realize how giving Phil is was one day he texted my dad about working out. We were going to North Jersey to meet with Phil, but this was June and I had an early-morning workout. So, Phil told my dad he would drive down to us.”

Simms took a 1-hour, 45-minute drive down to South Jersey on a June Saturday morning. He worked out with Kyle for an hour, then got right back into his car and drove the 105 minutes back to his Franklin Lakes, New Jersey home. Later in June, right before the Rivals 3 Stripe Challenge in Atlanta, Simms came back down again at 6 a.m. to throw with Kyle for 45 minutes for some fine tuning.

“Phil isn’t in it for the money or attention, he’s someone who genuinely cares,” Kyle said. “That kind of commitment you never forget. I wish there were more people around like Phil Simms. I can’t wait to work with him again after Christmas break.”