'I have no idea where the skull came from' 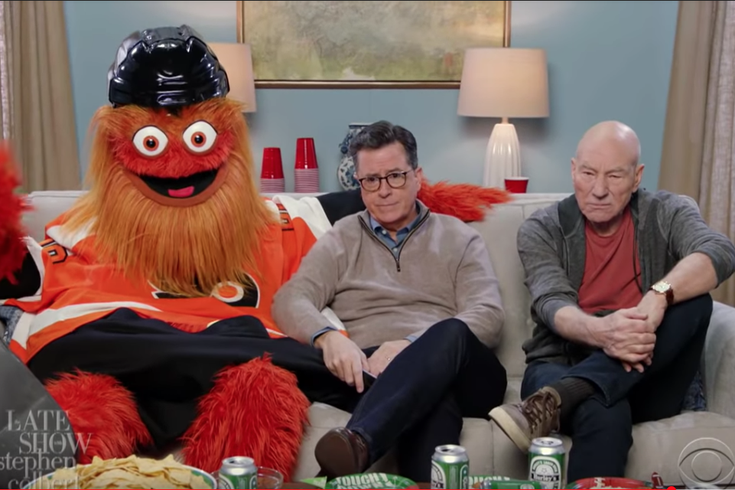 Gritty appears on a special edition of the "Late Show with Stephen Colbert."

The CBS host started his late night show with a Super Bowl party at his house. Sir Patrick Stewart pops over excited for the festivities saying that he loves American football, noting "They get to use their hands."

There's a knock on the door and Colbert goes to answer it and much to his surprise and horror, it's Gritty. Colbert goes to shut the door but turns around to find the orange-haired mascot in his house. Stewart is excited to see him, saying they go way back, including Stewart's time with the Royal Shakespeare and Company.

Gritty pulls out a skull and Colbert says, “Oh, sure, Hamlet.” To which Stewart replies, “No, Gritty played Juliet. I have no idea where the skull came from."

Speaker of the House Nancy Pelosi and Senate Democratic Leader Chuck Schumer stop by for a quick visit. Colbert asks why they came over and Pelosi commented, "We figured your little get-together needed us." The host asks why and they say while tipping their sunglasses, "Cause we're the party leaders," as Gritty plays a hair metal styled intro on guitar.

Watch the full appearance below.