Gather 'round the family for a very Gritty crafting event 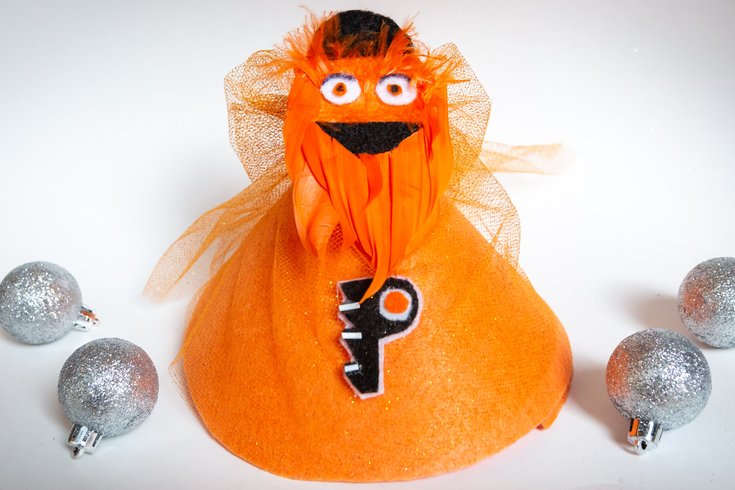 Hark! The herald angels sing…glory to the new-born Gritty.

We were lucky enough to be blessed with this orange-haired creature this year, and what better way to celebrate this angelic ‘thing’ than to exalt its presence onto your Christmas tree.

Because you see, underneath that menacing googly-eye he’s really a softie with a big heart who’s come to protect the Flyers. (Yeah, I know - he’s trying, ok? It’s hard to guide people when your eyes don’t always sit right.)

Gritty is really a guardian angel of the Flyers and may even be the guardian angel of Philly, which is why it makes perfect sense for him to replace that angel you put on top of the tree this year. I mean look, I’m sure that angel is nice and all, but Gritty, as odd as he is, adds a bit of ‘Philly holiness’ to Christmas.

So, get out your glue gun and some felt. It’s about to get weird…and maybe a little frustrating, but when you’re done, the angels will sing upon your household and Christmas shall be blessed with all that is Gritty. (It's also not supposed to be perfect, so don't get too hung up on minor details. Angelic Gritty embraces the perfection in imperfection, as should we.) 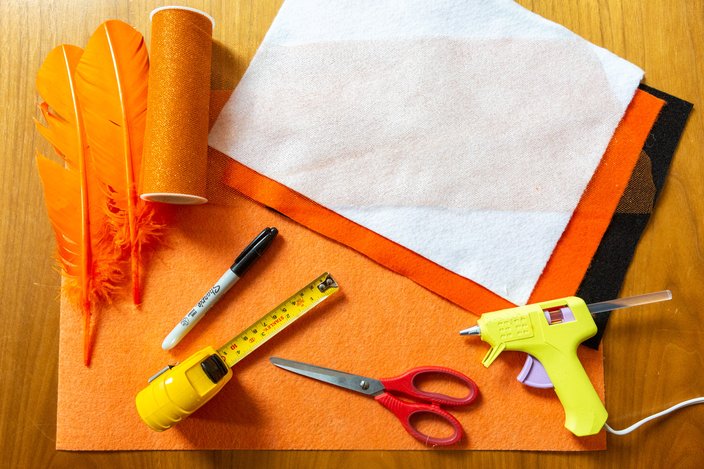 Tools and materials used to create the Gritty tree topper.

Step 1: Making the base

This is the easy part.

Make a cone out of the orange stiff felt material and hot glue the sides together.

To make a cone: Measure and trace a circle around 27 cm in diameter. Cut a wedge out of the circle and simply overlap the edges.

This is the part that gets a little trickier.

a) Using the leftover stiff felt from your cone, trace a circle about 6 cm in diameter and cut it out of the material.

b) For the eyes: Using your soft white felt, cut out two eyes about 1 cm in diameter each. Cut out small orange dots from the soft orange felt and layer and glue it on top of the white eye. Put a black dot in the middle with a sharpie pen for the pupils, and use that pen to create lids on the top of the eyes.

c) Cut out the smile from the soft black felt. It should be about 1.5 cm at the widest point of the mouth.

d) Cut the helmet out of the black felt as well.

e) Combine the parts and center them on the head. Make any adjustments necessary and glue it down. 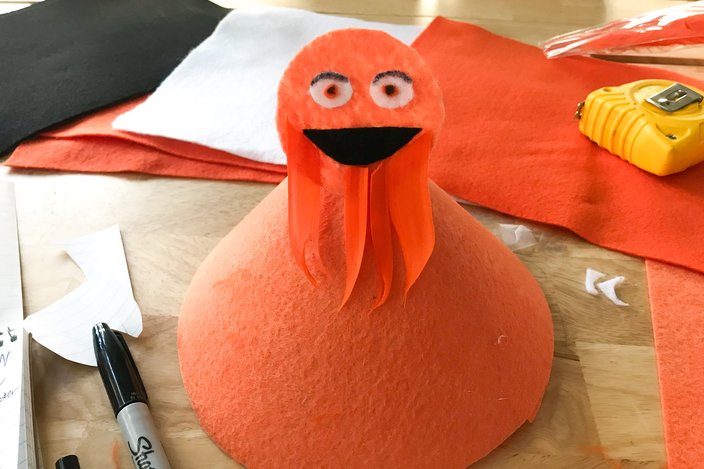 (As you can see, I added the tulle after I did the beard and because tulle can be a bit ‘sticky’ it was a bit of a process. So, don't do what I did - make sure you do this before the beard or it’ll be unnecessarily difficult.)

This is one of the more tedious steps, but in my opinion, it’s also the most fun, because this is when the topper really starts to turn into Gritty.

a) Take a feather and cut the plumes off the stem.

b) Create your first layer of feathers to shape the beard and use the fluffy plumes to make his eyebrows and the top half of his face. Try to match the contours of his face when applying the feathers.

c) Glue the first layer down, then add a second and/or third layer with more feathers to give it dimension.

**Feel free to skip this entirely, especially if you’re working with kids or don’t have the time. While it’s hard to create Gritty without a Flyers logo, cutting the logo out of soft felt is not exactly an easy task. It will test your patience.

a) Layer white felt in the shape of the Flyers logo under black felt with the same logo shape. Glue together.

b) Add a white circle and layer it on top with an orange circle inside of the "P."

Step 6: Gritty gets his wings

a) Take the tulle and grab about an arms length worth of material, cut and tie a bow with it. (You want a thick bow that isn't too long.)

b) Glue the bow about 4-5 cm down from the top of the cone. For extra staying power, glue the wings slightly to the back so they stay up right.

And there you have it, your very own angelic Gritty Christmas tree topper. May Gritty watch over your festivities and bring you peace and joy this holiday season.