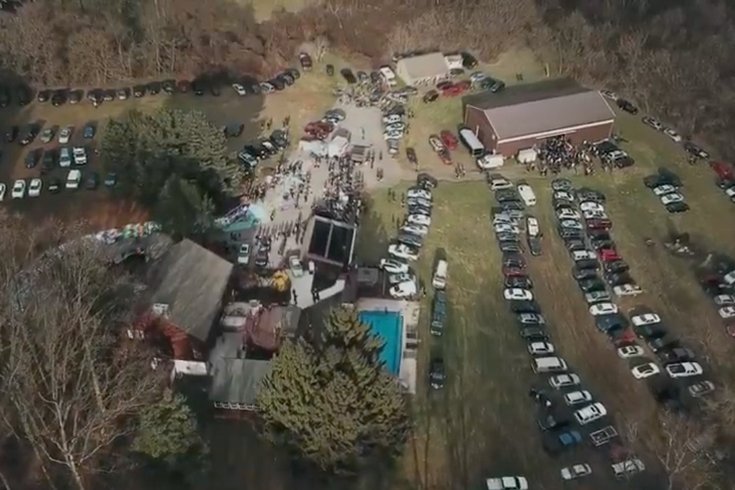 Drone footage from the party at Castle Bam shows dozens of cars and fans at the start of the event.

Bam Margera, the skateboarder and West Chester native most widely known for his MTV reality shows in the 2000s, put out an open invitation for a house party Thursday, and the people listened – and paid up.

Margera invited fans to Castle Bam, his house in Pocopson Township that was the backdrop to his 2003 show "Viva La Bam," and which is now being renovated to become an Airbnb. Margera teased the event and what it was all about on social media over several days, calling especially for local skateboarders and artists to head over.

The open invite came with a cover charge, however, of $40 cash, according to Philly.com, though that didn't stop hundreds of cars from taking up the sprawling property. Drone footage shows what could easily be at least 1,000 guests total. Keep an eye out for what looks like Paul Vile's Jelloman van there, too.

Throughout the day, guests could buy beer, pizza, and, if feeling really charitable, some of the house's artwork. Users on social media documented performances from Mike Nappi, People's Blues of Richmond, Valiant Thor, and others at the party.

What is Margera raising all this money for? Margera put the call out for fans to help him destroy the skateboarding bowl in his property's barn, saying he was working with pro skateboarder Danny Way to create a better bowl.

The night culminated in a giant bonfire, where a Christmas tree and some furniture met a fiery fate.

See our previous coverage of the party here.