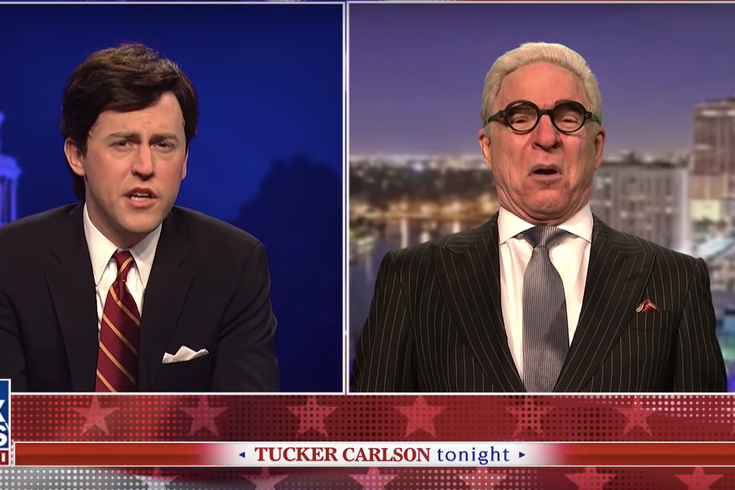 Steve Martin was the most recent alumni of "Saturday Night Live" to return to the stage for the cold open.

Martin appeared as the recently-indicted Trump adviser Roger Stone during the Jan. 27 episode, which was hosted by rookie James McAvoy with a musical performance from Philly's own Meek Mill.

The cold open was a parody of "Tucker Carlson Tonight" hosted by Carlson (Alex Moffat) with special segments on the government shutdown, Wilbur Ross (Kate McKinnon) and on Stone's recent arrest by special counsel Robert Mueller. Stone's Friday arrest could be the most direct evidence unearthed regarding the supposed alliance between the Trump campaign and WikiLeaks in an effort to slander Hillary Clinton's presidential run, according to the New York Times.

Martin parodied Stone's somewhat bizarre love of Richard Nixon, evident in his dramatic display on Federal District Court steps after his arrest where he held up Nixon's signature 'Victory' hand signs and declared his innocence. Here's more on why Stone was indicted and what that means for President Trump.

During the cold open, Carlson reminded Stone that he was there to get some donations — and pity — from viewers.

"Right, right, the pity thing I wanna go for," he says.

Martin also slipped in his most well-known catchphrase from his stint on the show that will please all you "SNL" junkies out there: "Hey, I'm just a normal and straightforward guy!"

At the end of the sketch, Carlson thanks Stone for joining him.

"I said thank you," Carlson replies.

"Oh no, that wasn't a question. I was saying that to the president! Pardon me!"