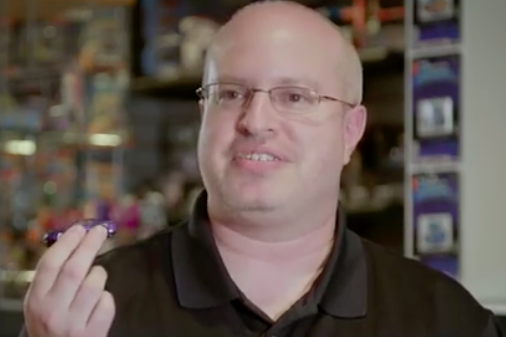 Andy Goodman interviewed in his Mechanicsburg garage filled with thousands of toy cars.

Everybody's got something that makes them tick, an obsession that could germinate as a hobby and then bloom into a full-blown collection whose every detail is committed to memory. Some people like stamps, others like coins, and then there are the fans of bobbleheads, magazines, art, whatever.

Andy Goodman, a suburban dad from Mechanicsburg, Pa., is a self-described "hardcore car guy" who prefers to collect miniature toy models rather than actual automobiles. He's got pretty sound reasoning: since they all cost about a buck apiece, why not collect the cars he loves in scale, thereby containing costs and fulfilling his desire in spirit?

"I've been a car guy since I was 16," he told Jalopnik in a feature that ran last fall. "I started collecting toy cars when I was 20."

Naturally, he blames the whole thing — 30,000 toy cars occupying 3,000 square feet of space in his garage and basement — on his dear wife.

As you can see in the video below, that funny moment became the catalyst for a lifetime hobby. Even Goodman's daughter is showing the telltale signs of a young collector.

It's not clear whether Goodman officially holds a world record for his collection at this point. In 2014, Gizmodo reported that Billy Karam, of Beirut, held a Guinness World Record with more than 30,000 scale vehicles of Hot Wheels and Matchbox toys. Regardless, according to Opposing Views, Goodman eventually wound up buying the Cobra Mustang of his dreams.