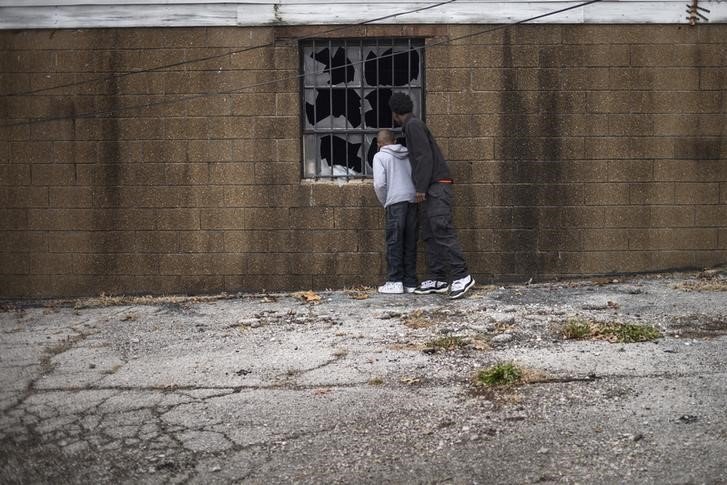 Boys look through the destroyed windows of the Flood Christian Church, which was set ablaze during recent unrest in Ferguson, Missouri November 30, 2014.

Suicide rates have fallen among young white children in the U.S. but they've gone up among black youngsters, according to a new study of suicides in kids under age 12.

Suicide is rare among these very young children, but it does happen, lead author Jeffrey A. Bridge of The Research Institute at Nationwide Children’s Hospital in Columbus, Ohio told Reuters Health by email.

The difference in suicide rates between young children of the two races is masked by the overall suicide rate for all young children, which remained stable during those 20 years, he and his colleagues wrote in JAMA Pediatrics.

“When I initially looked at the results I thought we had made a mistake in the analyses because historically white youth in the United States have had higher suicide rates than black youth,” said Bridge.

He and his colleagues examined U.S. Centers for Disease Control and Prevention (CDC) records on suicide among kids from five to 11 years old between 1993 and 2012.

A total of 657 children died by suicide during that time - an average of 33 per year, the researchers found. About 84 percent of the deaths occurred among boys. Hanging and suffocation was the most common method.

The overall suicide rate remained stable at about one suicide per one million children during the 20-year period.

However, the suicide rate nearly doubled among black children during that time while it fell among white children, the researchers found.

The increase in suicides among black children was isolated to boys, among whom the rate grew from about 1.8 to about 3.5 for every million children.

For white boys, the suicide rate declined from about 2 to about 1.3 suicides per one million children over the 20 years.

“Many factors – including increased exposure to violence and traumatic stress; early onset of puberty; and lower likelihood to seek help for depression, suicidal thoughts, and suicide attempts – may be contributing to the disparity, but the specific impact of each of these factors is unclear,” Bridge said.

“Along the same lines, for many years black youth have used mental health services less than white children and youth,” said Stacey Freedenthal of the University of Denver, who was not part of the new study. “This could be a factor in suicide rates, but why now when the differences in service use have existed for so long?”

Suicide rates are also on the rise for black adolescents and adults, particularly among black males, Freedenthal told Reuters Health by email. “It’s possible that this increase in black children’s suicides is part of the same phenomenon.”

It’s also possible that child suicide may be more often investigated or reported in the black community than in the white community, but the actual suicide rates are the same, according to Carl L. Tishler of The Ohio State University Department of Psychiatry in Columbus, who was not part of the new study.

“I’m saying ‘may’ because we don’t know,” Tishler told Reuters Health by phone.

“What’s significant is that there is a clear group of children who do feel that badly, who are pushed by what’s going on in their lives to the point that they don’t want to live anymore,” he said.

Children who are victims of domestic abuse are at higher risk for suicide, according to research, and those in homes racked by protracted, difficult divorce may also be at increased risk, he said.

“Parents need to know that children under the age of 12 can and sometimes do think about suicide,” Bridge said. “It is important to ask children directly about suicide if there is a concern about a child.”

Warning signs include suicidal statements, being unhappy for an extended period, withdrawing from friends or school activities or being increasingly aggressive or irritable.

“The research has shown that asking children directly about suicide will not trigger subsequent suicidal thinking or behavior,” Bridge said. “It does not hurt to ask.”

Parents who see these signs should consider taking the child to a mental health professional, he said.