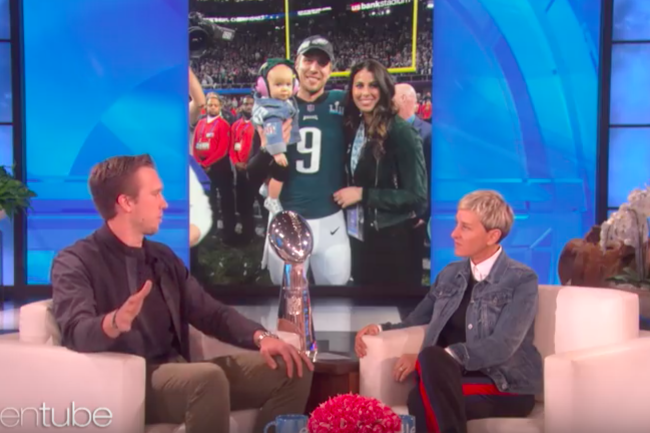 The incredible story of Nick Foles' journey from near-retirement to Super Bowl MVP is undoubtedly the most powerful narrative surrounding the Eagles' championship run.

It was a combination of perseverance, luck and willingness to conquer fear that gave Foles his opportunity to shine on the biggest stage of his life to date.

On Tuesday, after soaking up the sun in Disney World and parading through Philadelphia last week, Foles joined Ellen DeGeneres to talk about how he overcame his doubts and returned to football with a clearer purpose.

"I was going to stop playing the game two years ago," Foles said.

"There were different things [going on] in my life – my wife and I, and in my career as well, to where I had lost the joy of the game. And I can't do something unless my heart's in it, especially the game of football."

Foles said he didn't touch a football for a long time after his disastrous season with the Rams.

The rest is now history. Foles returned to the Eagles, the team that drafted him, after a season with the Kansas City Chiefs under coach Andy Reid. When called upon after Carson Wentz's season-ending injury, Foles delivered beyond everyone's wildest imagination.

DeGeneres also gave Foles a chance to do a little target practice on the studio set. It looks like he's still in the zone.