Prosecutors still have not filed charges in connection to nine deaths 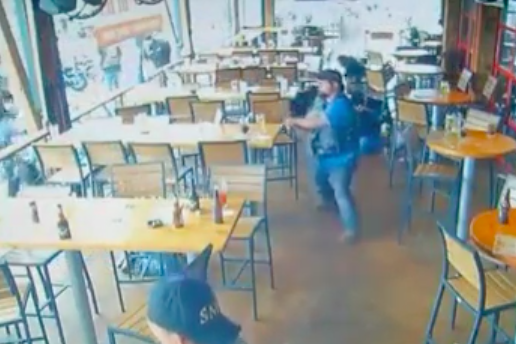 New surveillance footage obtained by CNN shows the chaotic scene of the deadly May shootout between biker gangs at a restaurant in Waco, Texas, certain details of which have been shrouded in mystery for months.

The May 17 shooting outside Twin Peaks restaurant resulted in the death of nine people and left 18 others injured, according to NBC's Waco affiliate KXAN. More than 170 people were arrested as police attempted to gather information about the attack that took place during a planned biker meeting outside the bar.

In the surveillance video below, bikers, customers and waitresses can be seen scrambling to safety as the shooting begins.

The shooting reportedly involved two rival biker gangs, the Bandidos and the Cossacks, as well as affiliated gangs.

The individuals who were jailed, killed and injured were not from the Waco area. While those arrested were charged with engaging in organized criminal activity, prosecutors in McLennan County have not filed charges in connection to the nine deaths.

According to KWTX-TV, the Waco Police Department said that it did not release the video to CNN, citing a gag order in the case barring dissemination of video and public documents.

Despite the gag order, The Associated Press previously obtained hundreds of pages of incident reports indicating that police shot some of the bikers with their rifles. It was not clear whether the shots were fatal. The Waco Police Department said there were 16 police officers at the scene and a total of 475 weapons were collected.

Investigators have refused to confirm who was responsible for the shootings that killed eight Cossacks and one Bandido.