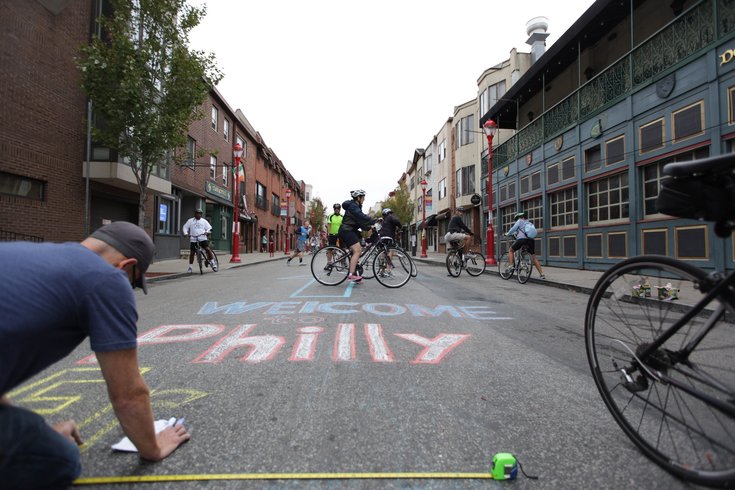 James Burns, 41, of the Mural Arts Program welcomes pedestrians and cyclists to Philly Free Streets with chalk art on Sept. 24, 2016.

Last month's first inaugural Philly Free Streets event was a smash hit, according to the mayor's office, and now there are some hard numbers to back that up.

The car-free event on Sept. 24, organized by the city's Office of Transportation and Infrastructure Systems (OTIS), brought an estimated 30,000-40,000 people to South Street stretching from the Delaware River to the Schuylkill River.

Bikers, runners and pedestrians filled the streets to take advantage of a pilot expansion to the city's traditional closure of Martin Luther King, Jr. Drive, first introduced in 1994 to promote active transportation and healthy lifestyles.

On Friday, OTIS released the findings of an initial survey of 600 people who participated in the Saturday event. Their impressions were overwhelmingly positive.

Among the 600 people surveyed, 64.3 percent of respondents engaged in outdoor activity that otherwise would not have occurred without Philly Free Streets. The event also attracted people of all ages, with a slight lean in favor of women.

From a diversity standpoint, 27 percent of respondents identified as non-Caucasian, including 17.2 percent reporting as African-American.


Among those who participated, data from app sponsor Vea Fitness found that walkers and runners averaged about 2 miles in distance traveled, compared to four miles for cyclists.

“Philly Free Streets was a fabulously successful event,” said Joe Syrnick, Executive Director of the Schuylkill River Development Corporation. “Many of those on the Schuylkill Trail on September 24th were there because of the event, and had never been to the trail before. So it is clearly teaching people about the joys of the trail, and of active transportation. Many of them told me they hope Philly Free Streets will become a regular event – and we here at SRDC fully agree."