Swarthmore students end nine-day sit in, look to next semester for answers 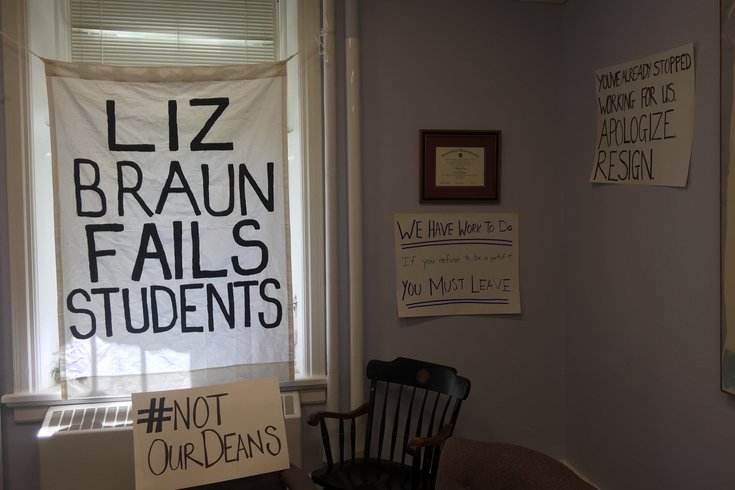 Students plastered signs on the walls of Parrish Hall before leaving on Wednesday afternoon.

The students at Swarthmore College ended a sit-in on Wednesday that lasted nine days.

But sit-in probably isn’t the best word — it was a study-in, sleep-in, eat-in.

Students and members of a group called Organizing for Survivors, or O4S, took over Swarthmore’s main administrative building, Parrish Hall every night, over the weekend, through finals week.

They were looking for verbal commitments that administrators would change the way sexual assault reporting and investigations occur at their college.

They vowed not to leave until they got some.

Their demands include the resignation of three deans and administrators, changes to the school’s Title IX federal civil rights policy and for fraternity housing to be removed, among others.

On Monday O4S held a community forum intended for the deans to hear student concerns and experiences moving through Swarthmore's Title IX process. None of those deans attended, however President Valerie Smith did.

At the conclusion of their sit-in on Wednesday afternoon, O4S members met with Smith and administrators to read every demand on their list, point by point. They negotiated how each could be addressed.

What they came up with will be released to the university community in the coming days, said member Priya Dieterich, 21.

“Yesterday, we met for two hours with students and we had a productive, open – though not always easy — exchange with one another,” Smith said in a statement to PhillyVoice. “I am confident we share a commitment to upholding Swarthmore’s essential values, and to continuously making them better. Now we plan to figure out how we can move forward together.”

Junior Morgin Goldberg, 21, a founding member of the group and a survivor of sexual violence, said that right now, Swarthmore does not have a “functioning” Title IX system.

“My own hearing was really horrible,” she said of an incident she reported her freshman year involving a Swarthmore fraternity member.

Other complaints from students include being ignored after reporting an incident, "slut shaming" when being questioned and in some cases student retaliation after reporting.

This isn't the first time Swarthmore has been accused of mishandling the reporting of these cases. In 2013, 130 alumni brought many of these issues to light in a letter to the college.

Goldberg said her biggest hope for this summer — before class begins again next fall — is that there are personnel changes.

“I hope the college acknowledges [the deans] are harmful,” she said. “And I’m hoping the recommendations are taken seriously and it’s not a way that they can just put it off.”

The entire process has been disappointing, Goldberg said. But the positive outcome was the community born of the cause.

“There was a real sense of obligation to support one another in ways that filled in the gaps administrators left,” she said.

Freshman Bria Dinkins, 19, participated in the sit in as much as she could. But it was just yesterday that Dinkins received the long-awaited end to the 150-day reporting process to her own assault. And the answer wasn’t what she was hoping for.

“He was found not responsible,” Dinkins said. “From the first weeks I started the process of going through the investigation, I wanted to pull out. But I didn’t feel like I had the agency to do so. Based on how I was being questioned and things were going, I knew this was going to happen.”

Dinkins said for a long time, participating in events surrounding sexual misconduct were “too much.”

“This is the way to put my energies forth and my shift in mentality,” she added.

Dieterich said she was impressed with the students’ willingness to be there, and to stay committed through finals week and the end of the semester.

“It was exhausting, and it was weird to spend that much time in an administrative building, but it was encouraging to see how many folks were willing to do that,” she said. “There really was suddenly a sense of community, because we all knew why we were there.”

Before they left Parrish Hall, Dieterich said, students plastered posters and messages on the walls of the deans’ offices. 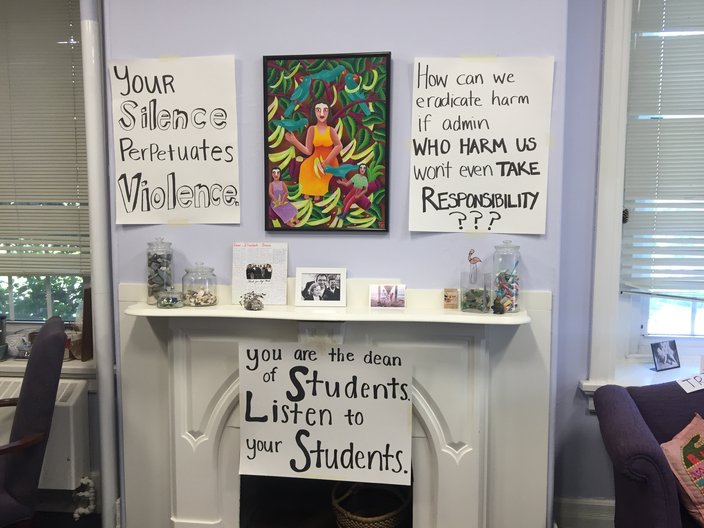 And boxes to pack up their stuff.

“It was clear to us that those people haven’t been doing their jobs,” Dieterich said. “They’ve already vacated their positions. For us, they’ve effectively left.”