March Madness: Watch for these upsets in the Sweet 16 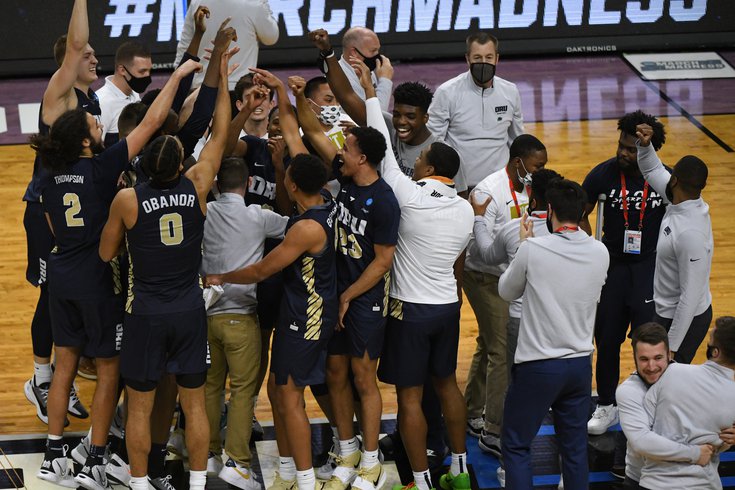 Oral Roberts can't do it again... can they?

It's probably no shock that upsets in the third round (or the Sweet 16) of the NCAA Tournament are fairly uncommon.

In fact, in contrast to the first two rounds, the round of 16 is where the cream of the crop usually finds itself — one of the major reasons why teams are so proud to lift Sweet 16 banners in their home arenas. One NCAA win is a fluke, good luck. Two shows you are one of the big boys.

We urged you to pick a bunch of upsets the first weekend and if you did, maybe you're still alive in your bracket pool. In total, nine lower seeds (not including 8 vs. 9 matchups) won in the first round this year. In the second, there were five upsets.

This makes for an interesting Sweet 16 landscape, with seven of the 1-through-four seeds still alive, and nine seeds higher than five vying for slots in the Elite 8. Which means, theoretically, there will be a handful of high seeds still playing come Monday.

As for upsets, it would make sense for you to select at least two — whether you are betting the games online somewhere like PA.Unibet.com, filling out a fresh bracket via their Bettor Bracket promotion, or simply planning your weekend viewing habits.

So before you tune in for more March Madness, here's a look at four games we like that could help put you over the edge...

In this game, the No. 1-seeded Illinois was supposed to play against No. 4 Oklahoma State (or even No. 5 Tennessee). But two Cinderellas erased that possibility, as Sister Jean and Loyola-Chicago are at it again. And quite interestingly, the Missouri Valley champions are favored — by 6.5 points — over the Pac 12's Beavers.

The Ramblers have won eight in a row, while Oregon State has won five. But the quality of their opponents is important to note. Oregon State has won against tournament teams like Colorado, UCLA, Oregon and USC. Loyola-Chicago, aside from their statement wins in the tournament, have beaten up on the likes of Northern Iowa, Missouri State, Bradley and other mid-major schools. The simple fact that a school with the talent and resume of Oregon State is an underdog to a team that is from a non power conference is alluring enough to make it worth betting on the Beavers to cover the spread, or even win outright.

Villanova was a very popular team to be upset, outright, twice in this tournament and yet, they've held their own, showing that perhaps their weird, COVID-shortened season was not doing them justice. However, they have drawn perhaps the worst possible matchup in the Round of 16, facing the daunting No. 1-seeded Bears from Baylor.

Baylor boasts an extremely potent offense and was able to thwart a top-20 team in Wisconsin by 10 points in their second-round victory. Jeremiah Robinson-Earl and Villanova, coached by tournament staple Jay Wright, have been extremely efficient to start the tourney, but are still short-handed without point guard Collin Gilllespie and have not faced an offense like Baylor's this year. The spread may actually not be giving the Bears enough credit. If they can connect from deep, this one could get out of hand. Take Baylor to cover the spread and advance.

RELATED: Villanova in unfamiliar territory as March underdog, hoping to upset No. 1 seed Baylor | Three reasons why Villanova can reach the Final Four

Is there a more unlikely story in sports right now than Oral Roberts? The Golden Eagles not only shocked Ohio State in the first round — becoming the first 15-seed to win a tournament game since 2013 — they beat Florida two days later to advance to the round of 16. They're the second No. 15 seed ever to achieve the feat, and the teams they beat were not in any way shape or form weak squads. Which is why it seems like there is really no reason to doubt that the Golden Eagles, who in close, contested and clutch performances took care of teams from the mighty Big 10 and SEC, shouldn't be able to at least keep things close against another SEC squad in the Razorbacks from Arkansas.

Oral Roberts has won seven games in a row at the right time. One upset is a fluke. Two may be something special — and something not to overlook. ORU did not win due to good luck either, as they barely drained one third of their three-point attempts in their first two wins of the tournament. They shot well better than that in the regular season. If they actually hit from deep against Arkansas, watch out. Take Oral Roberts here to cover the double-digit spread running away.

The last game of the Round of 16 is one between perhaps the most evenly match opponents still in the running, with both of these conference foes clinching their spots in the second weekend after unexpected upset wins. First USC, which made short work of Drake before absolutely pulverizing Kansas, won by a ridiculous 34 points. That win, paired with their ranking being higher than the Ducks has them favored according to Pa.Unibet.com, but not so fast.

Oregon had a "bye" into the second round after COVID ended VCU's tournament hopes early, but they had no rust. Oregon proved it belonged, and is a sleeper pick to play next weekend after they took care of business against a 2-seeded Iowa squad — a team that many saw as a Final 4 threat to Gonzaga in the East Region. The Ducks won that one by 15, and they're being given 2.5 points on Sunday. This is a coin flip at best, and perhaps Oregon will be a bit more motivated after falling to USC in a Pac-12 conference game — their only loss in a stretch of 11 wins — back in February. Take the points, and the Ducks to cover this one.