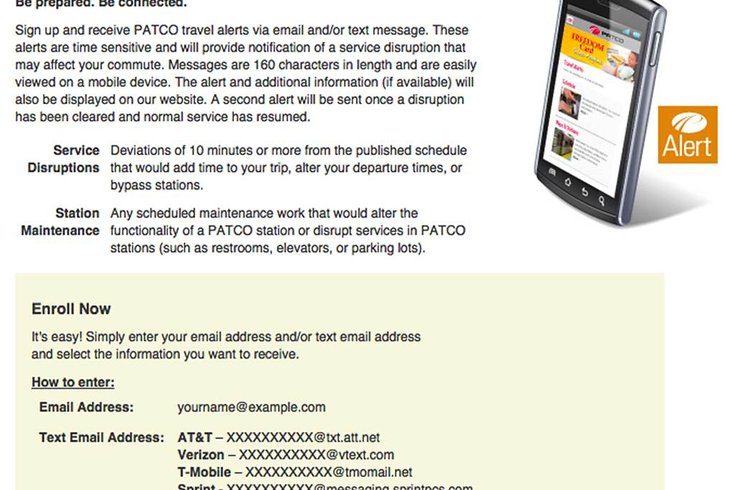 The signup page for PATCO's system text alerts. But the system has been down for weeks after it was hacked, said John T. Hanson, executive director of PATCO’s parent, the Delaware River Port Authority.

As the Port Authority Transit Corporation states on it own online sign-up for the alerts:

“These alerts are time sensitive and will provide notification of a service disruption that may affect your commute…. A second alert will be sent once a disruption has been cleared and normal service has resumed.”

Trouble is, the text alert has been off-line for months.

Why is it off-line?

He told members of the DRPA Citizens Advisory Commission earlier this month that not only was the system hacked, but no one has figured out how to make certain it can’t be hacked again.

No subscriber information was compromised in the cyberattack, Hanson said.

Larry Davis, a member of the advisory committee who operates the Twitter account @PatcoWatchers, said he’s seen the alerts come back on for a day or so, only to disappear, though not recently.

John Boyle, chairman of the advisory committee, said there are people – like him – who rely on the text alert system, even though similar information is posted on PATCO’S Facebook and Twitter accounts.

When it works, the text system is a simpler way to get information about delays and issues, Boyle said.

Hanson on Friday said the issue is being worked on, but there are no timelines for getting it back online.

He said he was unaware that subscribers were not being told of the system outage at signup and promised to address that problem as soon as possible.

In other DRPA business, Hanson said the agency is working on a plan to transfer its ferry linking Philadelphia to Camden to the Delaware River Waterfront Commission, saying the ferry service is "not a good business for us."

The DRWC is already the contracted operator for the ferry and better able to meet public demands, because DRPA is "less nimble and more bureaucratic," Hanson said. The DRWC did not respond to a request for comment.

Hanson said the best option seems to be a sale of the ferry for $300,000, with equal annual payments spread over a decade.

Boyle, who commutes partially by bicycle and sometimes takes his bike on the ferry, said he hopes a new operator will make the ferry friendlier to commuters.

Hanson declined to comment about Bennett Cornelius, 60, who lost his job last month as assistant general manager for PATCO due to agency politics.

At the advisory committee meeting, Hanson told members there are employees who get jobs at the agency due to politics – and people who lose jobs due to politics.

Some day, he said, he knows someone will come to his office and say, "John, we're going another direction."

Hanson on Friday said he would not have spoken so candidly had he realized a PhillyVoice reporter was in the room.

"I don't make personnel comments," he said. "It was a mistake."

Boyle said Hanson't comments about the politics of the organization, while not surprising, were the most candid he'd ever heard about the nature of the bi-state organization.