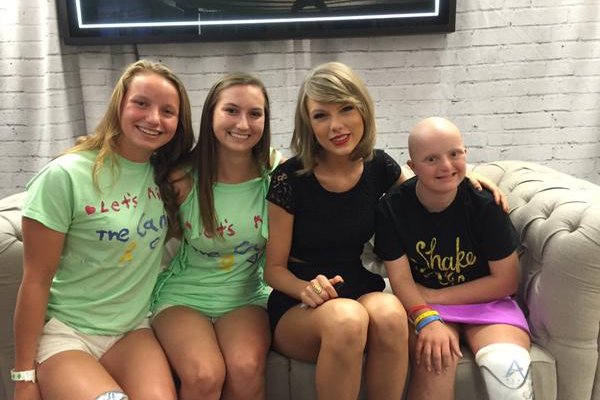 Taylor Swift made one teenager's wish come true before her concert in Philadelphia Saturday night.

Dover Police, the same department that recorded one of its officers jamming out to Swift's "Shake It Off," published a YouTube video in May about 13-year-old Victoria Marsh.

Marsh, who has down syndrome, was recently diagnosed with a form of bone cancer called Osteosarcoma. The video notes that Marsh is a big Swift fan, but had to give her tickets to this weekend's concert to her sisters because her disease would prevent her from going.

The video asked that Swift pay a visit or FaceTime Marsh when she came to Philadelphia for her "1989" tour. Dover Police used the hashtags #SwiftAWish and #TeamVictoria to raise awareness about Marsh's dream on social media.

On Saturday, Swift made Marsh's wish come true, as Dover Police tweeted a picture of the two together.

Dover Police said on their Facebook page that Swift paid the visit before Saturday night's concert at Lincoln Financial Field after Marsh's doctors gave her an eight hour pass from the hospital. They thanked everyone who helped make the meeting happen.