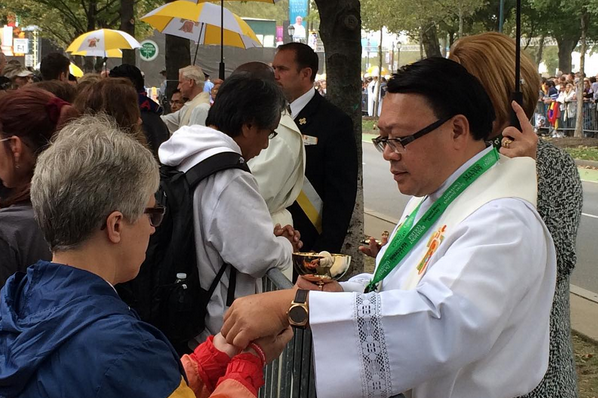 Clergy serve Communion on the Benjamin Franklin Parkway during the papal Mass.

Thousands of Catholic pilgrims were awestruck by Pope Francis and the exuberant, multinational crowd that gathered Sunday on the Benjamin Franklin Parkway to celebrate the largest public Mass in Philadelphia since Pope John Paul II visited in 1979.

"They call it being under the shadow of Peter," said Christian Cortez, of Morristown, New Jersey. "Thank God, Peter is still walking among us. We're just full of life, full of joy. It's an emotional outburst."

The crowd, which included people from across the world, easily numbered among the hundreds of thousands. People began arriving on the Parkway shortly after it opened at 6 a.m., waiting hours to see Pope Francis and receive Communion.

Many among the crowd previously had seen either Francis, Emeritus Pope Benedict XVI or the late John Paul II. But many others had only ever seen the pope serve Mass on television.

"The difference isn't him being here," said Elliot Bauer, who traveled with his wife, Emily, from Louisville, Kentucky. "It's everybody else. The masses that come – that's the most powerful thing."

The Mass, which lasted nearly two hours, included a homily delivered by Pope Francis and Holy Communion distributed by dozens of clergy who walked down the Parkway from the altar to serve the masses.

Andy Bozanic, of Immaculate Heart of Mary parish in Wilmington, noticed that the Parkway became as quiet as a church at many points during the Mass. He particularly enjoyed the Rite of Peace, when he greeted people from various nations.

"That's a very special moment and it's hard to replicate that kind of thing," said Bozanic, who came with his wife, Shannon.

Scores of pilgrims lingered on the Parkway following the Mass. Many walked as close as they could to the altar, set beautifully against a backdrop of the Philadelphia Museum of Art. Some pilgrims handed their cameras to security officials, who willingly snapped pictures from the best vantage points.

A TWICE IN A LIFETIME EXPERIENCE

Jack Kelly, of St. Jane Frances parish in Easton, Pennsylvania, also was on hand when Pope John Paul II served Mass at Logan Square — directly down the Parkway from where Francis celebrated Mass.

Prior to the Mass, Pope Francis spent about 40 minutes parading around the Parkway in the Popemobile. He traveled much slower than he did Saturday night, when he took a similar lap prior to the Festival of Families. This time, he stopped several times to kiss babies and to visit the Knotted Grotto, where thousands of people had attached their prayer requests to ribbons hanging from the sculpture.

"We had our intentions there," said Maria Gallo, of Marlton, New Jersey, who attended Mass with her boyfriend, Anthony Nicolini of Burlington Township. "That brought me to tears. And to have Communion blessed by the Pope – that made me cry too."

"This was awesome," added Nicolini, of Saint Katharine Drexel parish in Burlington. "Think about it. How often does the Pope come here? For us to do this, it gave me chills."

Some people, however, missed out on much, if not all, of the Mass due to long lines at security checkpoints. Austin Borja and Emily Smith, both students at the University of Pennsylvania, said they waited in line for hours, but only witnessed the final moments of Mass.

John Nicholas, of Philadelphia, had a similar experience. He was discouraged that the city did not place viewing screens near security checkpoints.

"A nice lady put a TV on her stoop for everybody to see," he said.

The papal Mass marked the final public event on Pope Francis' first trip to the United States, a journey prompted by the World Meeting of Families.

Greg Packer, of Huntington, New York, spent the last week following Pope Francis to the various stops on his visits to Washington, New York and Philadelphia.

Packer watched Francis address Congress while sitting on the National Mall. He saw him again at the Sept. 11 Memorial in New York. Then Packer came to Philly, where he followed Pope Francis to Independence Hall, the Festival of Families and the papal Mass.

The most memorable moment of his many Francis experiences?

"I'd have to say this one," Packer said immediately following the Mass. "Because God was watching over millions of people. The Pope made sure of that."

Packer observed the Mass from the front row of the ticketed-only section, providing him an up-close view as Francis served Mass.

"It had more of a meaning than it would have in the back," Packer said. "You really see his presence. You feel his presence and you feel the presence of people around you."

"I know myself, being a practicing Catholic, it sometimes is really sad to see a church on a Sunday," said Guerra, who volunteered throughout the weekend. "The pews aren't as filled as they were when I was younger. I'm sure it's revitalized the Archdiocese (of Philadelphia). It can't be anything but good for them."