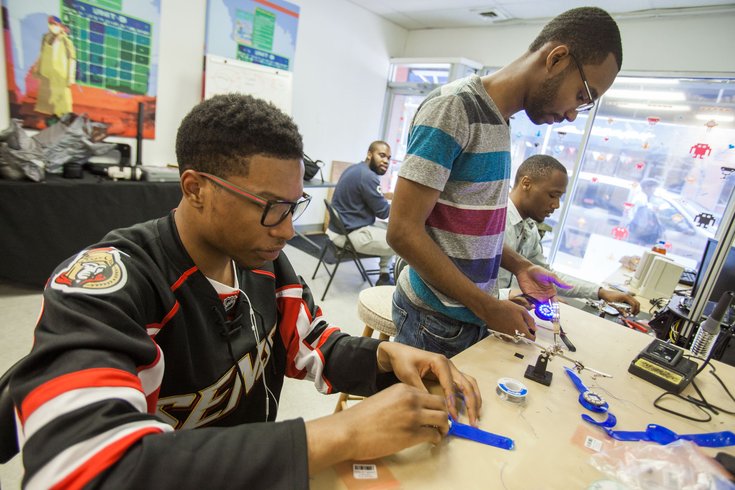 Temple University students, from left to right, Nuri Bracey, Stephen Pettus and Iyasu Watts, along with lead instructor, Nana Essuman, seated in the back, assemble the GPS watches that they made.

As part of the 5th annual Philly Tech Week, on Saturday, a three-mile race will showcase the work of a student group that spent months developing the technology to make it happen.
Twenty-five teams of two will navigate a course through the city using a GPS locator constructed in the shape of a watch and an accompanying mobile application. Participants will head toward checkpoints where they will have to answer a history question to receive their next location.
And the whole thing was designed, developed and built by students who are part of Creative Tech Works Design Studio, a Philadelphia-based organization that promotes technology education for a mix of urban youth. The race was designed by students who wanted their inventions to be both efficient and attractive.
In short, “we wanted it to look really pretty,” said Stephen Pettus, a Temple student who was one of about a half-dozen to work on the project.
And some of the mayoral campaigns will be taking part.
“As a campaign goes, Doug Oliver’s mission is education and jobs what better way to educate and inform people than through an event like this,” said Oliver's spokesperson Teresa Lundy. While Oliver, a Democrat, won’t be there, she said, the campaign will be manning one of the checkpoints and taking part in the race.
The students created the technology in a small workshop near Temple’s main campus. On a recent Friday afternoon, four of them fiddled with the pile of 3D printed plastic casings they had designed. Each casing would be fitted with a GPS unit that would be attached to a set of lights.
“The wearable tech actually tracks location and lights up when you get closer and further away,” Pettus said. That information will let participants in the race know whether or not they are near their target. The mobile app will also show them the location of their next target. 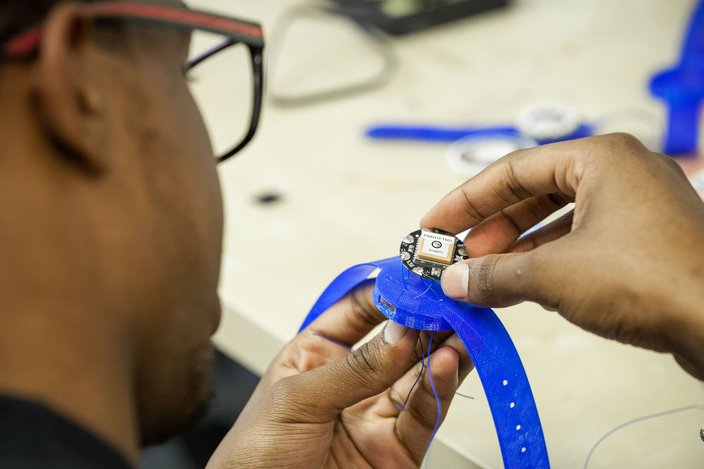 Nuri Bracey, a freshman in Temple University's Mechanical Engineering program attaches the GPS tracking device to the watch band.
Thom Carroll/Philly Voice
At first, they developed a casing for a GPS device that would go around a person’s arm but that was scrapped because of its large size. Developing something that was wearable wasn’t straightforward and the group went through a number of drafts before landing on the final watch-shaped version.
“Everything is handmade,” said Jamie Bracey, a director for STEM or science, technology, engineering and mathematics education at Temple University
The point of the project is two-fold: showcase their technology skills and provide a fun activity that allows participants to explore the city and its history. The students wanted to blend technology and an educational opportunity and actually make it work. Pettus said people have tried combining the two before but “it hasn’t always worked out” -- they wanted a fun approach.
One of the students on the project is Bracey's son Nuri, who is a freshman at Temple.
“At the age of 12, I was hauled to my first …” he pauses and jokingly corrects himself as some of the other students laughed. “I was taken to my first [technology] program.”
Since then, “I’ve gone up in the ranks until I got here,” he said. The team putting on the race is made up of some of the studio’s most advanced students but kids starting at about age 14 can participate in some of its introductory programs.
Professor Bracey said she started the group because technology is vital to today's economy.
She wanted to, “Create a space, an open space, for kids with any kind of background to come in and explore their natural and developed talent in computer science and engineering.”
“The motivation [for] it and culture of what we do is just to build their identities,” she said. “There are certain ways of behaving that this kind of design helps foster.”
Some of the students said that as freshman or sophomores, they are already receiving job offers, which is in part the point.
“We want to focus really hard on where the jobs are in the future,” Bracey said.