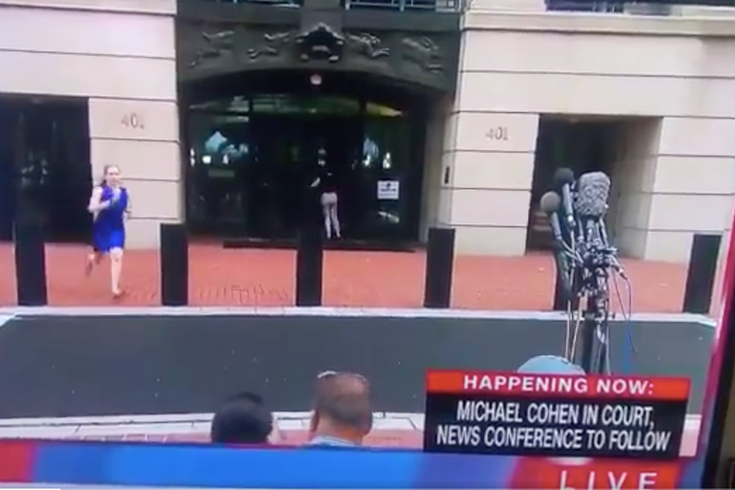 Next to Michael Cohen's guilty verdict, the biggest thing to blow up Twitter on Tuesday was a Temple University journalism student.

As news broke that President Donald Trump's former campaign chairman Paul Manafort and former lawyer Michael Cohen had been found guilty of eight counts of financial crimes each, you could see reporters on TV racing out of the court room (no phones allowed in court) to tell their editors the news and get out a story.

RELATED: Jefferson Health CEO named among most influential in health care after Trump

That's when the "woman in the blue dress" was filmed on CNN running across the screen with Manafort's verdict in Alexandria, Virginia. And although she wasn't the first out of the court room, she was quickly dubbed the hero of the internet for her impeccable form and seemingly impenetrable dedication.

The sprint from the Manafort courthouse after the verdict: guilty on 8 felony counts; hung jury on 10 counts. (No phones allowed in courthouse, so news comes via fleet feet.) pic.twitter.com/JDc8QyMBxs

Her name is Cassie Semyon, a Klein College student and intern with NBC News.

Yes, it is me, the journalist in the blue dress, running after the #ManafortTrial verdict. Thank you @Jacquelyn_M for the photo! #GoBlueDressGo pic.twitter.com/IkOM7VbWC5

And that's when we all lost it.

You should get a Nike deal XD

I'm going as "journalist in blue dress after Manafort trial" for Halloween. And no, it isn't just so I don't have to wear heels.