The one where Colton jumps the fence 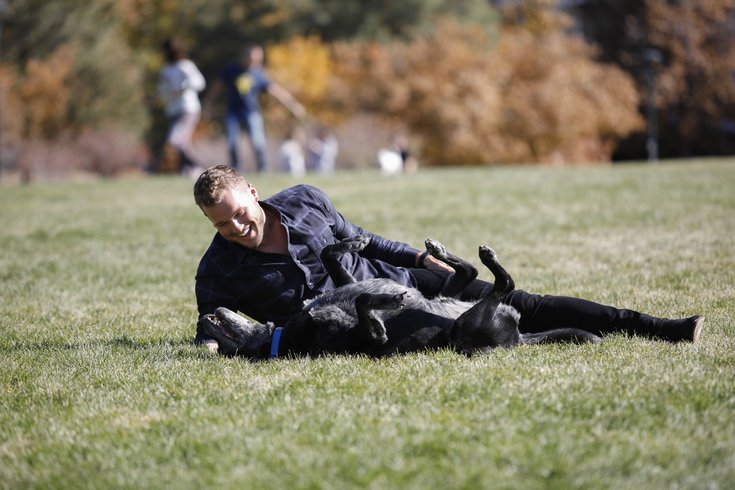 Colton jumps a fence but doesn't take the dog.

After receiving three out of four blessings from the remaining contestants’ fathers on their respective hometown dates, Colton received his biggest rejection of the season in Portugal.

It happened! Colton finally jumped the fence. But let’s backup and set the scene.

Before departing for Portugal for the epic fantasy suites episode, our virgin Bachelor and show host Chris Harrison have a little chat. Just like kids sitting on their stoop after a game of stickball, Colton and Chris discuss what every middle-aged man and reality TV star talk about; his virginity.

Colton reminds Chris he is a virgin, which Chris is clearly over talking about (and same with the rest of America) but Colton reassures him if the moment is right, he’ll be ready (queue the Cialis commercial). What’s most alarming with this little chitchat is that Chris very clearly had an earpiece in. For a show that claims it’s not scripted, this makes you think.

In case you got lost in the Colton and Cassie drama, Tayshia had the first date of the episode. After flawlessly executing the Koala move, the two boarded a helicopter and made awkward virgin jokes while simultaneously commenting on how beautiful Portugal is. I wouldn’t be surprised if Colton and Tayshia endorse each other on LinkedIn for their ability to multitask.

The two then find a nice plot of rocks on a cliff overlooking the ocean, and further demonstrate to America how they have very little chemistry. More awkward virgin jokes are made, and it’s clear as day Tayshia is out to take this man’s V card.

Things get serious at their nighttime date when Tayshia opens up about being cheated on during her previous marriage. Colton assures her he would never cheat on her (what a great guy!). Then it’s time for the fantasy suite.

Now we have applauded “The Bachelor” for their tremendous background music for the past 20 seasons. However, the music that was piped in as they entered the fantasy suite left a lot to be desired. With a weird ensemble of Peter Pan meets Mulan music playing, Colton makes all of Bachelor Nation cringe by explaining that although he is a virgin, he is experienced in other ways. What a visual.

The morning after the fantasy suite dates (and as a reminder the fantasy suite is the only time on the show where the contestants have complete private time. No cameras, no microphones, nothing.) it’s clear as day that Colton is still a virgin. Despite the foreshadowing of Colton popping the champagne bottle (we see you ABC) Tayshia was way too put together after a supposed night of lovemaking. Both Colton and Tayshia would later confirm no physical intimacy took place.

Now for Cassie’s date. Colton, putting on his best Vineyard Vines modeling wardrobe, takes Cassie all around Portugal. They stop at many local shops where Colton suggests they should get matching pajamas for the fantasy suite. Not only is this awkward (given what’s about to happen), but can you get more friend-zoned than suggesting you buy matching pajamas? After dancing with senior citizens, where an older gentleman legit stole Cassie from Colton for a dance, the meltdown begins.

Colton explains to Cassie that her father did not give him his blessing to marry his daughter. This came as a shock to Cassie, who was clearly flustered. As the two went their separate ways to get ready for the nighttime portion of the date, Cassie received an unexpected visitor.

Cassie’s dad appeared at her hotel room door. As a reminder, Cassie is from California. That means the show flew out her dad to Portugal just for this conversation. Despite a cameraman being in her room prior to her dad showing up, Cassie was stunned to see him.

Mr. Randolph proceeds to explain to Cassie that he doesn’t think she is in love with Colton. She does not deny this. Her dad also states that he doesn’t want to dictate what she does (then why did he come all the way to Portugal?). Cassie then tells her dad that she isn’t ready for it to be over, but doesn’t want to get engaged (again, she must not understand the premise of the show). As we discussed in last week’s column, Mr. Randolph is perfectly within reason to not think her 23 year-old daughter (who is fresh out of a long-term relationship that was portrayed on another, unrelated, reality TV show “Young Once”) is ready to be engaged after knowing Colton for a couple weeks. Cassie makes up her mind that she has to breakup with Colton and leave the show.

At the nighttime portion of the date, all hell breaks loose. Cassie tells Colton her dad showed up at her hotel room today. Colton immediately looks off camera to the production staff knowing what’s about to happen. Would a TV show really do this to Colton again after suffering heartbreak with Becca (on “The Bachelorette”) and Tia (on “Bachelor in Paradise”)? You bet.

Cassie set the Guinness World Record for saying “I don’t know” for the most times in one sitting. After repeating that over and over again to Colton about her feelings for him, Colton decides to risk it all. After asking Cassie if she is going home, and she responds in the affirmative, Colton starts uncontrollably convulsing.

Then, in something we truly have never seen before, Colton repeatedly tells Cassie that it’s her that he wants to spend the rest of his life with. Uhh what about the two other girls left? Colton didn’t care. He went for it doubling down again claiming if she isn’t ready for an engagement, they didn’t have to be engaged; he just wanted to be with her. In the most inopportune time, Cassie tells Colton she loves him, but is not in love with him. Could this confuse Colton anymore?

At this point Colton has had enough, and decides to walk Cassie out (they walked across a muddy lawn, and didn’t even use the walkway). Colton storms off to his tree house like a 12 year-old boy who just got his bike stolen, and starts going crazy.

Here we go. He pushes the camera out of the way. Breaks some sort of glass object. Starts walking off into the night when someone on production screams, “Somebody get Chris.” Chris Harrison, who literally appeared out of nowhere, starts yelling for Colton. Wait; is this “The Truman Show” in real life? Colton approaches the fence, and finally jumps.

With a cameraman, producer and Chris Harrison all trying to get the gate open, Colton is running wild in Portugal. Chris Harrison puts on his best Sherlock Holmes meets Elliot Stabler impersonation and tells the search committee to follow the barking dog.

The episode ends with Colton left roaming Portugal by himself, and a giant “To Be Continued” flashes across the screen. Bachelor Nation is wondering how will this all end now that Colton essentially quit the show and told Cassie he only wants to be with her. What will he say to Tayshia and Hannah G. (who hasn’t even had her fantasy suite date yet)? Will they ever find Colton (spoiler, they do)? All these questions to be answered on the two-night season finale March 11 and 12.

But don’t worry, the Women Tell All episode is airing tonight, Tuesday, March 5, and we will have that recap for you right here.

• Numerous staffers, producers and former cast said it took them a very long time to finally open the fence. However, it was edited down on the episode to make it look like they got it open in a timely manner. This means Colton had ample time to really go missing, thus the “search” for Colton is legitimate, and not a stunt by the show.