This pup's ready for the pope 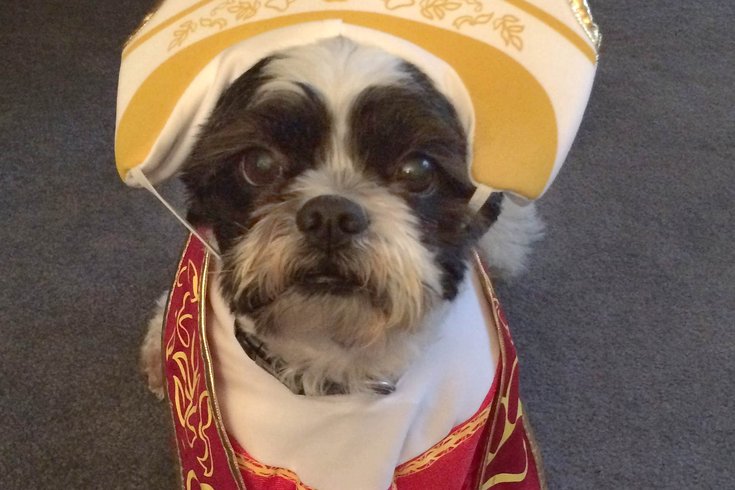 Buddy, a 6-year-old Shih Tzu, wears his papal costume ahead of Pope Francis' visit to Philadelphia. His owner, Denise Gump, of Upper Southampton, enjoys dressing up her pet.

When Pope Francis arrives in Philadelphia Saturday, one suburban pooch will be ready.

Buddy, a 6-year-old male Shih Tzu owned by Denise Gump of Upper Southampton, Bucks County, will be wearing a Heavenly Hound pope costume for much of the weekend.

"I have all kinds of outfits and costumes for him," said Gump, 58. "When I saw the pope costume, I said I have to get this."

She ordered the canine costume from Amazon, where it retails for $14.84.

"He didn't like the hat," she said recently. "He was trying to bite it."

Gump, who worked 27 years as a cafeteria worker in the Centennial School District and now volunteers as an EMT with the Warminster Ambulance, is a longtime parishioner at Our Lady of Good Counsel Roman Catholic Church in Southampton.

Buddy wore a tuxedo and top hat for a contest in the annual Southampton Days celebration. He'll be wearing his papal cape and mitre as Gump and her family watch the events on TV.

Gump said she is looking forward to following the pope's visit as it unfolds throughout the weekend.

"Buddy will be dressed up and watching it with us," she said.