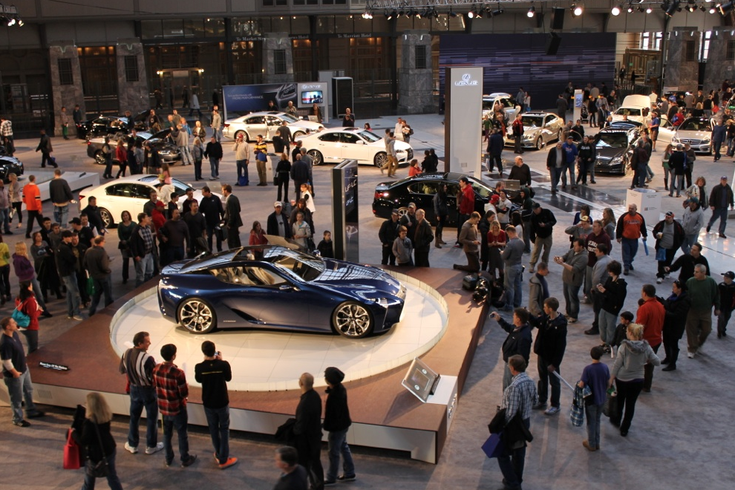 Philadelphia Auto Show-goers will have more than 700,000 square feet to cover at the Pa. Convention Center.

The annual Philadelphia Auto Show, one of the city's most popular attractions, got underway on Saturday as thousands packed the Convention Center to behold more than 700 vehicles on display.

The non-selling show provides visitors a no-pressure opportunity to peek inside upcoming vehicle models and marvel at concept, exotic and classic model cars.

The event, which is parked in town until Feb. 8, got revved up on Friday night with a black-tie tailgate benefit for the neonatology division at Children's Hospital of Philadelphia. ABC 6 reports the benefit raised more than $425,000 to be dedicated to pulmonary, airway and neurology research.

While car sales aren't directly a part of the event, according to Kevin Mazzucola, executive director of the Auto Dealers Association of the Greater Philadelphia Area, about 40 percent of people who come to the show buy a car in the next 12 months, CBS Philly reports. That would suggest $2.5 billion in sales indirectly influenced by the Auto Show.

This year's Auto Show is set to host radio broadcasts, special exhibits by automakers, a display of cars owned by Eagles players, and few guest appearances over the course of the next week.

Some of the industry's latest tech innovations improving safety and entertainment will also be on display, including Wifi, stability control and a lane departure alert system. The sole concept car in this year's show, the Buick Avenir, even sports wireless charging for mobile devices.

Before being taken over by the Automobile Dealers Association of Greater Philadelphia in 1997, the Philadelphia International Auto Show premiered in 1902. Tickets to the 2015 edition can be purchased here.