The top 3 methods for removing ticks from skin

The quicker you pull them off, the less likely they will transmit disease 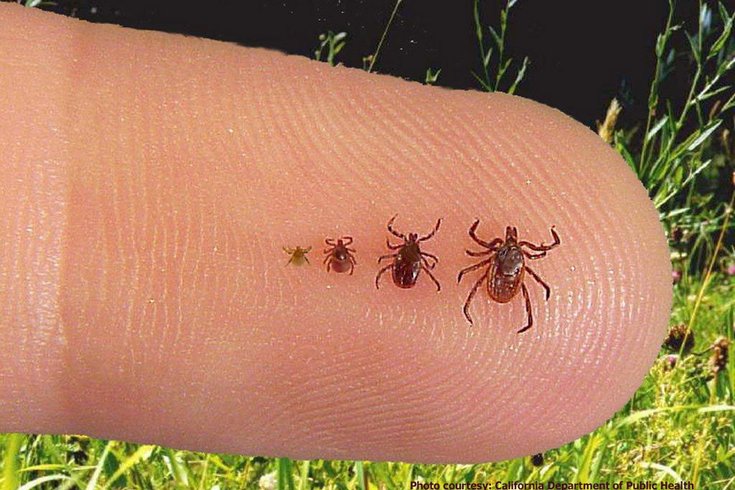 Blacklegged ticks are quite small and could be mistaken for a freckle. From left to right: The blacklegged tick larva, nymph, adult female and adult male. When the blacklegged tick is in its nymph stage, the risk of transmission of Lyme disease is the greatest. Nymphs are tiny (less than 2 mm) and are difficult to see.

With rates of Lyme disease increasing, along with growing tick populations nationwide — but in Pennsylvania, especially — it’s important to know how to properly remove the disease-causing insect.

Of course, the less time a tick is attached to the skin, the less chance that a disease will be transmitted. (According to U.S. News and World Report, Lyme disease transmission increases notably after 24 hours of attachment.)

Here are the three best tick removal methods, according to the news outlet, which recommends trying them in this order:

RELATED READ: Ticks spread plenty more for you to worry about beyond Lyme disease

Soak a cotton ball in liquid soap and cover the tick attached to skin for at least 30 seconds with it — oftentimes, the tick will just reattach to the cotton ball and lift away.

Using a pair of sterilized fine-tipped tweezers, grab the tick’s head — coming in at an angle parallel to the skin — and pull straight up, away from the skin until the tick releases it’s grasp. You’ll want to make sure you don’t squeeze the tick’s body.

This method only works after a fresh bite and if the tick isn’t swollen. Using the edge of a credit card, you can scrape the tick off the skin. If any part of the tick breaks off in the process, use tweezers to remove remaining pieces and rubbing alcohol to sterilize.

The U.S. Centers for Disease Control and Prevention remind that you should never try to crush a tick with your fingers. Instead, dispose of a live and freshly removed tick by putting it in alcohol or a sealed bag or container. You can also wrap it tightly in tape or flush it down the toilet.

It’s also worth noting that Lyme disease is not the only disease ticks can pass on to humans. Others include: Anaplasmosis, Borrelia miyamotoi, Heartland virus, Powassan disease, 364D rickettsiosis and others.