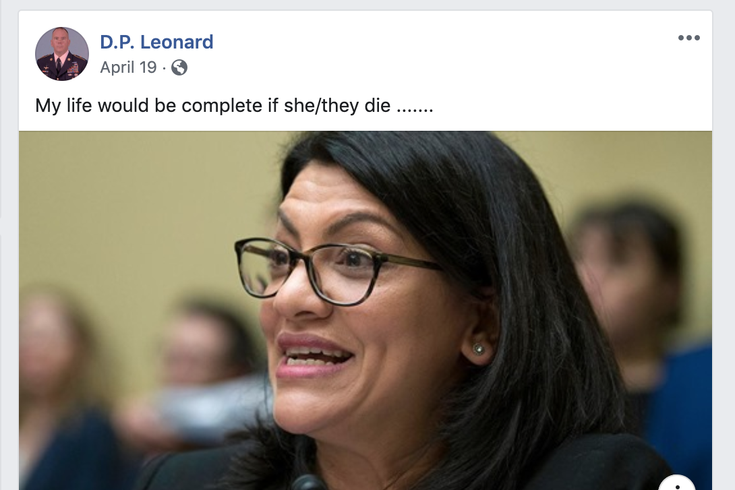 This image is a screen capture of a controversial Facebook post by Toms River Regional School Board member Dan Leonard, who decided not to run for re-election. He will finish his current term and will leave office on Dec. 31.

Toms River Regional School Board member Dan Leonard, who refused to apologize after saying his "life would be complete" if U.S. Rep Rashida Tlaib died, will not seek re-election to school board when his term expires.

Leonard, 42, of Beachwood, Ocean County, told the Asbury Park Press he made the decision because he did not "want to compromise the school district and all the great work that we have done over the last two to three years."

Leonard has received backlash for two Facebook posts he made in mid-April about U.S. reps. Tlaib and Illhan Omar — both Muslim and Democrats.

The board member wrote on Facebook, "My life would be complete if she/they die ..." in a post that included a link to a Fox News article about Tlaib calling for a hunger strike in response to U.S. Customs & Immigration Enforcement's handling of immigrants at the U.S. border.

In another post, Leonard described U.S. Rep. Ilhan Omar as a "Terrorist … 100%" and linked to a post discussing a quote, shared by Donald Trump, from Omar about the Sept. 11 attacks. The Washington Post's fact check ruled that President Trump twisted and misrepresented Omar's words to achieve his point.

Last week, Toms River Regional School Board attorney Stephan R. Leone told Asbury Park Press that Leonard's comments were "totally inappropriate, not condoned by the Board of Education and do not reflect the board's attitude or opinions."

The New Jersey branch of the council on American-Islamic Relations also spoke out against Leonard's comments and called for him to resign — calling his posts "bigoted, hateful and threatening."

In the days that followed the original Facebook posts, Leonard posted to more to his page, Team Leonard, and said that "there is "a difference between being Anti-Muslim and Anti-Sharia Law."