Toomey: Trump called with support (but no firm commitment) for gun-control measures

The U.S. senator from Pennsylvania liked what he heard from the president and vowed to 'try to persuade him' to support a three-pronged legislative approach 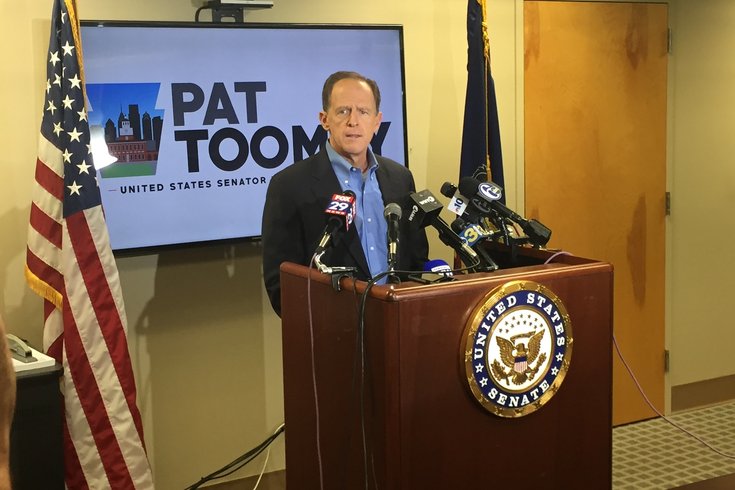 U.S. Sen. Pat Toomey discusses gun control measures that he hopes can gain bipartisan support in the wake of mass shootings in El Paso, Texas, and Dayton, Ohio, at a news conference at the U.S. Custom House on Tuesday, August 6, 2019. "I’m all-in on this," he said.

U.S. Sen. Pat Toomey had stood before in that same room at the U.S. Custom House in Old City, speaking about the same issues in front of the cameras and microphones.

This time, just days after 31 people were massacred in mass shootings in El Paso, Texas, and Dayton, Ohio, the best he could do was offer hope and optimism that the sentiments of his peers – and their constituents – will be on his side when it comes to gun-control efforts.

On Tuesday morning, Toomey hosted a 20-minute press conference to discuss an ongoing, three-pronged, bipartisan, legislative push to keep guns out of the hands of people who shouldn’t have access to them. But he made no promises.

Rather, he discussed the NICS Denial Notification Act which – with support from U.S. Sen. Chris Coons of Delaware – would require federal authorities to “alert local law enforcement within 24 hours when individuals ‘lie and try’ to purchase firearms, which can be a warning sign of additional criminal behavior.” (An interesting wrinkle to that proposal would be the establishment of a National Commission on Mass Violence with non-elected experts who “will study the causes of mass violence in the United States,” an area for which research isn’t readily accessible.)

Toomey also spoke about a bipartisan ’red flag’ measure that would enable families and law enforcement agencies to obtain a court order to prevent dangerous individuals from getting guns.

Finally, he brought up his long-stalled proposal, with U.S. Sen. Joe Manchin of West Virginia, to “expand all background checks to all commercial firearms sales."

“The mass shootings in El Paso and Dayton are the latest horrific examples of the violent scourge that is gripping America,” he said. “The perpetrators of these murders are cowards. We must do more to keep guns out of the hands of psychopaths. While no law will end mass shootings entirely, it’s time for Congress to act to help keep our communities safer.”

“The president showed a willingness to work with us on the issue of strengthening background checks.” – U.S. Sen. Pat Toomey

What Toomey relied upon for renewed optimism was getting a phone call, and seeing tweets, from President Donald Trump, in which he urged “Democrats and Republicans to come together” to pass bipartisan gun control measures.

“The president called me and we had a lengthy conversation about these ideas,” Toomey said Thursday. “The president showed a willingness to work with us on the issue of strengthening background checks.”

Toomey's optimism rests on the sense that the time is right, especially after the violent incidents this weekend hit so close together – about 13 hours – and “the accumulated pain after so many of these" mass shootings.

He noted the “red flag” measure and NICS Denial Notification Act could have an easier path to surmounting the Senate’s 60-vote threshold than expanded background checks.

Asked why he trusted that Trump would be an efficient ally in the effort after the president blamed video games, the media and the Internet in general for contributing to the problems, Toomey told PhillyVoice that Trump has reached out to him in the past. But while he senses a genuine concern from the president, Toomey was given no guarantees.

“I’ve gotten no commitment that he definitely supports this, but I am going to try to persuade him to do so,” the junior senator said. “The environment seems to have changed a little bit. I’m all-in on this. I’m focused on keeping all firearms out of the hands of people who shouldn’t have them.

"I've been working to get this to a vote for six years now. I want to get this done as much as anybody out there."