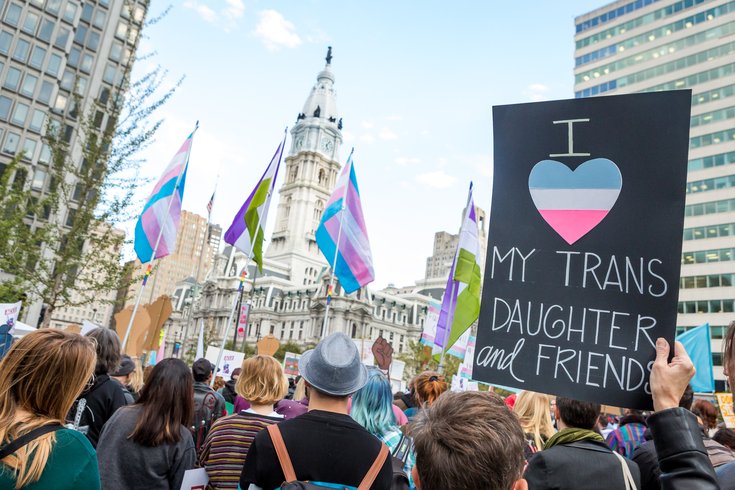 Protesters gather for the "Rally for Trans Existence and Resistance" at LOVE Park on Tuesday, Oct. 23, 2018. The event was organized to protest a Trump Administration proposal that would roll back protections for transgender people in the United States.

In what many are calling one of the most dramatic government efforts to roll back protections for transgender people in the United States, a memo first reported by The New York Times this weekend revealed that the Trump administration may be working to revise the legal definition of gender by essentially negating claims of gender identity in favor of biological determinations.

Trump confirmed yesterday that he is “seriously” considering moving forward with the effort, which would mean that the federal government would consider a transgender person’s sex to be something determined at birth rather than the gender with which they actually identify.

“Sex means a person’s status as male or female is based on immutable biological traits identifiable by or before birth,” The Times reported the memo as saying. “The sex listed on a person’s birth certificate, as originally issued, shall constitute definitive proof of a person’s sex unless rebutted by reliable genetic evidence.”

This new definition would ultimately impact transgender and non-binary people in many ways, most notably by removing protections for gender identity under such laws as Title IX, which currently bans discrimination.

Nellie Fitzpatrick, an attorney with Laffey, Bucci and Kent in Philadelphia, said the new definition, which could legally move forward, would change the way transgender people access housing, employment and public accommodation across the country.

“Here in Philadelphia,” said Fitzpatrick, “the Philadelphia Fair Practice Ordinance includes protections from discrimination against someone based on their gender identity in the areas of housing, employment and public accommodation. These local protections will remain in effect even in the face of the Trump administration’s attempts to ensure they do not exist at the federal level.”

She said that state governments also have the ability to step up and protect their constituents by ensuring there are similar anti-discrimination laws in place.

“Unfortunately, we have all witnessed our Pennsylvania legislature’s majority prevent these basic protections from coming into effect year after year,” said Fitzpatrick, “and we still remain a state without protections based on gender identity and sexual orientation.”

At stake: The estimated 1.4 million Americans who recognize themselves as a gender other than the one they were born into.

“There are no amount of local ordinances or state laws that can take away the trauma trans-identified people are reeling from as their mere existence is being debated, debased and erased by this president and administration,” Fitzpatrick said. 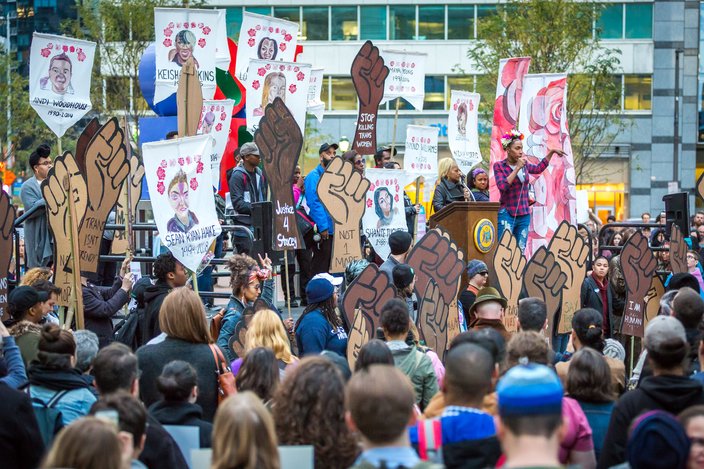 The reactions from supporters of transgender rights from Philadelphia to Harrisburg have been brisk this week, with a “Rally for Transgender Rights” planned from 4:30 to 6:30 p.m. today in LOVE Park.

Rue Landau, executive director for the Philadelphia Commission on Human Relations (PCHR), said that under the city’s current civil rights laws, people have been protected from discrimination based on gender identity for more than 16 years. She added that regardless of what the Trump administration decides, “transgender, non-binary and gender non-conforming people will continue to be protected in Philadelphia.”

“This effort to erase trans identity is an attempt to silence many of our fiercest activists, and the entire LGBTQ and allied communities will not stand for it.” – state Rep. Brian Sims

Amber Hikes, executive director of the Mayor’s Commission on LGBTQ Affairs in Philadelphia, said, “These attacks ... mark a catastrophic step back from ensuring equal rights for all Americans.” She added that, legally, she expects a fight.

“The proposed definition of gender is in direct contradiction with the majority of court decisions,” she said, “which uphold that anti-transgender bias constitutes sex discrimination under the federal laws.”

State Rep. Brian Sims, who represents the 182nd District in Philadelphia, an area that includes the Gayborhood, was quick to credit transgender leaders for bringing about much of the LGBT civil rights progress we see today.

“This effort to erase trans identity is an attempt to silence many of our fiercest activists,” he explained, “and the entire LGBTQ and allied communities will not stand for it.”

His major concern legislatively is that the proposal would “seek to erase the legal identities of transgender Americans in nearly every aspect of their lives. The White House is hoping to destroy decades of American jurisprudence and precedent, which currently and unquestionably recognizes the scientific and medical reality of trans existence.”

In Harrisburg, Todd C. Snovel, executive director of the new Pennsylvania Commission on LGBTQ Affairs, called the policy “devastating.” He said the commission “will continue to monitor this very closely and use our energies to prevent these discriminatory policies from being enacted,” particularly as it could restrict access to vital programs on both the state and federal level. 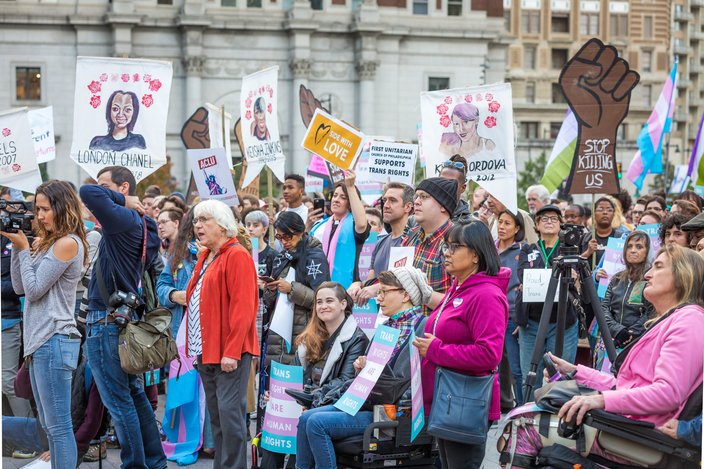 'I CAN'T HELP BUT BE SCARED'

For Deja Lynn Alvarez, a commissioner on the Mayor’s Commission of LGBT Affairs and a member of the board of directors of the William Way LGBT Community Center, Trump’s latest comments have caused a lot of fear and anxiety for her and within Philly’s close-knit trans community.

“It is actually making me angry and worried for my community,” admitted Alvarez. “On some level, I can’t help but to be scared.”

But she said that the pushback from (the Kenney) administration is also strengthening her resolve, “and reminding me once again why I have to continue this fight and that I have to fight harder.” She has been taking to social media to encourage trans allies to voice their opposition to this latest effort, and to ultimately show their support for transgender people.

Alvarez, a well-known community activist, has worked for many years to put a spotlight on abuses against the transgender community in Philly – and she said this latest fight is no different. But she is worried about the impact the anxiety is causing people who, frankly, already fear for their lives.

“The rates of depression and suicide affect the trans community at alarming rates,” she said. “To read this and hear this and see this takes an extreme mental and emotional toll on many in our community.”